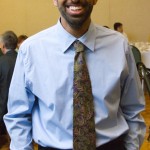 Unny Nambudiripad has been involved in animal protection since 1997. In 1998, at age 21, he co-founded Compassionate Action for Animals, a Minnesota-based farmed animal advocacy organization. He currently serves as CAA's Executive Director. Here are a few of the Unny and CAA's accomplishments:

Unny has trained and supervised hundreds of volunteers, raised funds, and has overseen every aspect of growing Compassionate Action for Animals into a powerful animal advocacy organization. He is most proud of keeping the organization focused on conducting its work with humility and respect, for being a persistent voice for animals, and empowering a new generation of effective animal advocates.