Through 300 bold international recipes, this cookbook answers the question, What if the world were vegan? It encourages the reader to open their plate to food from around the world no matter where their kitchen is.

Written by Genevieve Gamlin, author of TwinCitiesVegan.com and Compassionate Action for Animals volunteer

Vegan Eats World starts with asking what if the world were vegan?, followed by a quick "How to Use This Book" section which includes a key for icons used to label recipes. The book is divided into three parts. Part One, Kitchen Cartography, includes six sections: Before Cooking; During Cooking; After Cooking, Chill Out; Ingredients; Shopping Lists; and Kitchen Equipment. These thirty-four pages can be a life saver for the novice home cook as they are filled with countless how-to's and cooking terms defined. Part Two, The Recipes, is broken down into twelve chapters: Spice Blends; The Three Protein Amigos: Tofu, Seitan, & Tempeh; Pickles, Chutneys & Saucier Sauces; Salads, Spreads & Sandwiches; Soups; Curries, Hearty Stews & Beans; Dumplings, Breads & Pancakes; Asian Noodles to Mediterranean Pasta; Hearty Entrees; Robust Vegetable Entrees & Sides; Rice & Whole Grains: One-Pot Meals & Supporting Roles; and Sweet Beginnings. Part Three ends the book with menu ideas, online resources, recipe by icon index, thanks & acknowledgments, metric conversions, index, and an about the author section. As you can imagine, this is a large book reminiscent of a college textbook.

Diving into such a large book can be overwhelming. I thought about picking a recipe from each chapter, but I ended up going to the "Recipe by Icon" index and picking a few from the "On a Budget Section". While making my shopping list I was greeted by unfamiliar ingredients. They are referenced in Part One, but I still had to figure out where I could get these ingredients in my neck of the woods. I started with my usual grocers, Trader Joe's and Kowalski's, but wasn't able to find many of the spices. The next day my sidekick dropped by Indian Spice House in Eden Prairie and was able to find many ingredients on the list. This cookbook will most likely make you venture to specialty grocers. Unfortunately, I made the mistake of spending a small fortune on spices at Kowalski's before realizing how cheap the spices are at places like Indian Spice House. I think the "On a Budget" icon only applies if you already have most of the spices or can find a good online source.

It was finally time to cook the first recipe on my menu, jerk-roasted seitan strips, which calls for the seitan coriander cutlets. I did not read through the cutlet recipe since it had the "under 45 minutes from start to finish" icon. Big mistake. The forty-five minutes does not include preparing other recipes needed for the final recipe or pre-soaking of beans or nuts. So even though the seitan has the "45" icon the recipe calls for three minutes of kneading, ten minutes resting, thirty-four minutes baking, and at least forty-five minutes cooling before use for a total of ninety-two minutes. The jerk-roasted seitan called for blending up all of the ingredients then cooking for thirty minutes. That is a grand total of one-hundred-twenty-two minutes, not including miscellaneous time for prepping ingredients for a recipe I thought would take fewer than forty-five minutes.

Aside from the misleading icons, the recipes were delicious as well as fairly straight-forward and easy. I did run into one snag during a recipe that called for spices to be ground in a coffee grinder. Not having a coffee grinder, I figured I could use my one-cup food processor, but it didn't work so I ended up just putting in the spices whole.

I recommend this book to anyone who loves going out to any international restaurant and is interested in recreating dishes at home. The author states that she took some liberties with regard to what is authentic, but I did not notice anything that was too far off. One improvement would be if this book had an index that sorted the recipes by region. The author states that vegan cuisine does not live on a map, but it sure would be nice to pick recipes based on a dinner guest's favorite region. 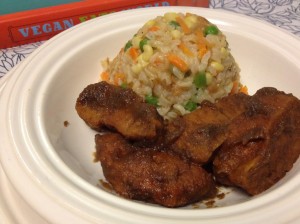 Jerk-Roasted Seitan Strips: Despite the length of this recipe, it was fairly easy. The seitan had a meat like texture and was delicious. The hardest part was trying not to cry uncontrollably after food processing the onion mixture. The finished product was very flavorful with a mild kick. The book suggests serving this dish with Island Brown Rice and Peas. I already had some cooked brown rice I wanted to use up so I just threw in some frozen veggies, coconut milk, and spices. 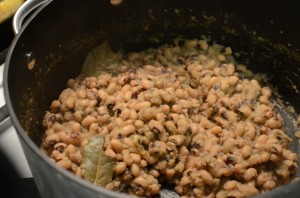 Coconut Black-Eyed Pea Curry: This recipe also calls for an onion to be food processed, convincing me that this book should come with a pair of goggles. For a recipe with coconut in the name, there was not a strong coconut flavor. This recipe was fairly bland, but makes a good side dish. 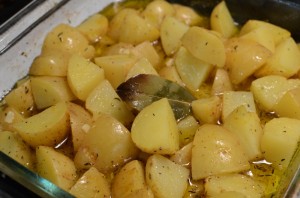 Lemon Garlic Potatoes: I had some extra potatoes to use up and I love garlic so I decided to make this dish as a side. They were really good mainly because you cannot go wrong with potatoes, but they weren't as lemony or garlicky as I expected. 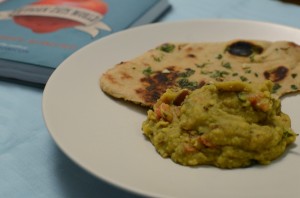 Sri Lankan Red Lentil Curry: This dish was hot! The strong flavors from the various spices were new to me. I loved the texture, perfect for scooping up with naan. 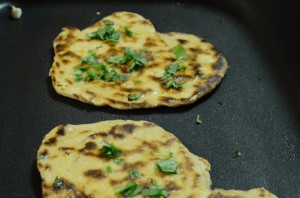 Yogurt Naan Griddle Bread: This was by far the best naan recipe I have ever tried. This naan was made with garlic and cilantro, but the book offers many different variations.

Japanese Soul Food Menu: Tonkatsu Sauce, Sesame Panko Tempeh Cutlets, Shredded Green Cabbage, Lemon Wedges, and Steamed Rice: This is my new favorite tempeh recipe. Normally I am not a huge tempeh fan because of the texture, but the way it's prepared in this recipe creates a perfectly crunchy outside and meaty inside. The tangy, salty sauce was easy to make and really made the whole meal, who doesn't love dipping?