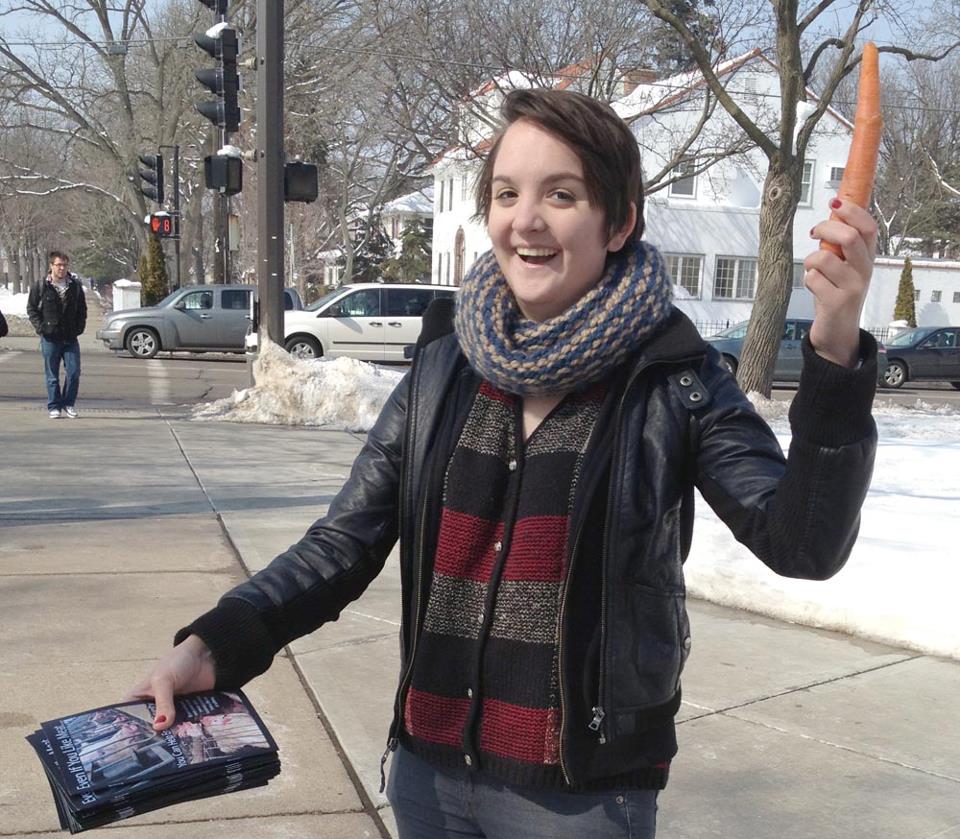 Welcome to Compassionate Times, Spring 2014! We have an interview with Compassionate Action for Animals Outreach Coordinator, Grace Van Susteren.

CAA strives to educate as many people as we can by exposing factory farming and encouraging individuals to change their diets, which in turns reduces animal suffering and death. As we embark on a new year, we wanted to take some time to reflect on some of our outreach efforts from 2013. Whom better to do that with than CAA’s Outreach Coordinator, Grace Van Susteren? We asked her a few questions about her favorite outreach initiatives from last year, and what’s in store for 2014.

In your opinion, what was the most successful outreach initiative you did in 2013?

One of my favorite (and most successful) events was leafleting at the May Day parade. I wasn’t the official outreach coordinator at the time, but I was coordinating the leafleting events as a volunteer. Sometimes, when we leaflet at events, people are in too much of a hurry or just won’t take leaflets; we bring enough leaflets to distribute to everyone, we often don’t end up using them all. At the May Day parade, though, I brought 2,000 leaflets and we gave out every last one of them, and could have given out more! The crowd was super receptive and were happy to accept leaflets. In fact, we even had people asking for leaflets if we somehow missed them, and they were really open to having a discussion about the material. A few were already knowledgeable about animal advocacy and were interested in learning more about CAA, which was nice. I don’t really remember specific people, but what was so striking was how friendly everyone was.

What do you think made the people at the parade so receptive?

I think people were more receptive at the May Day parade because the atmosphere lends itself to activism. There are usually many social groups at the parade advocating for something, and that makes people ready and willing to take leaflets and actually read them. Also, everyone is sitting and waiting for a parade instead of rushing to their car to get home after a concert. This gives them more of an opportunity to read the leaflet, because they would otherwise just be waiting around for the parade to start. The crowd in general was just fantastic.

Based on your work in 2013, what kinds of outreach initiatives do you plan on doing in 2014?

In addition to continuing our leafleting efforts, I’m really excited to expand our Pay-per-view program. Pay-per-view is when we offer passersby one dollar to watch a short video about factory farming. We typically do this on university campuses but have also tabled at a few festivals in the summer. In the last year, we mostly did tabling at the main student union at the University of Minnesota, but this year we’re adding tabling sessions in other locations on campus. Also, when it is nice outside again, we will have stands for the video players so we can table outside! We also play “Farm To Fridge” videos on small DVD players. Typically when a person is finished watching, we give them their dollar and ask what they thought about the video. We then discuss the video with them if they want and offer them more info in the form of Vegan Outreach’s Guide to Cruelty Free Eating leaflet.

Is there anything about your outreach work that has personally impacted you in how you approach it?

I have learned how to speak to people about animal issues much more effectively. Since I began coordinating outreach, I’ve been talking about animal issues much more frequently to those who don’t have a background (mostly at the Pay-per-view table). By answering many of the same questions over and over, I’ve gotten much more succinct in my answers and talking points. This is really helpful with college students, who are often very busy and don’t have a lot of time to chat. Being able to get across the information that’s central to CAA’s mission in just a few sentences is no easy task, but it gets easier every day. Practice really does make perfect (or almost perfect)!