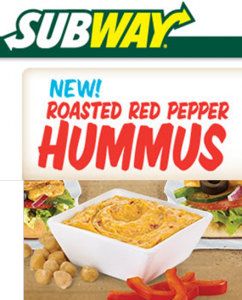 Over the past few years, Subway has worked to offer more options for health-conscious patrons. In 2012, Subway tested a variety of veggie meats in the D.C. areas and received raving reviews from customers, and in 2013 they rolled out falafel in more than three dozen stores in and around the D.C. area.

Now, Subway announced that they will offer roasted red pepper hummus in 1,000 stores across the country. Currently it is offered at an extra cost, but if the demand is high enough, they will consider putting in stores nationwide.

According to the Associated Press, Tony Pace, Subway’s chief marketing officer said: “It’s something we’ve been talking about for the last three or four years,” saying it has “tremendous potential.” As further noted in the article, Pace suggests that since many customers already order vegetarian subs, offering hummus would expand the meatless choices available to them.

We heard about this awesome news from our friends at Compassion Over Killing.