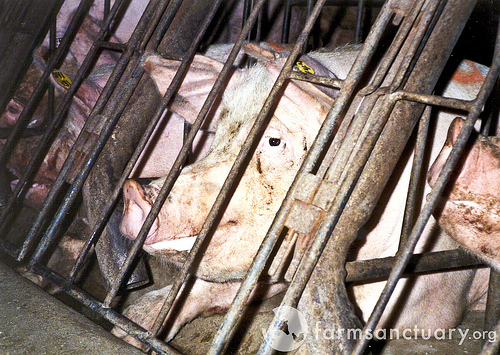 The Star Tribune announced that Cargill, one of the world’s largest agribusiness firms, has taken decisive steps towards phasing out the use of gestation crates for pigs by the end of 2017. Mounting pressure from both consumers and animal advocacy groups led to the big move. Paul Shapiro, the vice president of farm animal protection at the Humane Society of the United States, recently met with representatives of Cargill. Speaking of the pigs, he said, “These are 500-pound animals, curious and smart. To punish them with a type of life sentence of abject misery, it’s just out of step with mainstream American sentiment on how animals should be treated.”

Over the years, undercover video has revealed horrific conditions for pigs on factory farms. Gestation crates, which confine female pigs used for breeding to cramped metal cages for most of their adult lives, are considered particularly cruel and have already been banned in several U.S. states as well as in the U.K. and Sweden.

At Compassionate Action for Animals, we acknowledge and appreciate the work that groups such as HSUS have done to bring these issues to the mainstream awareness and to move us further along the pathway to change. We also encourage those who care about animals to continue along that path by making the transition to a plant-based diet. Visit our website for a Free Veg Starter Guide, and if you live in the Twin Cities area please join us at one of our community events. These events are designed to support you on your own journey in compassionate living.