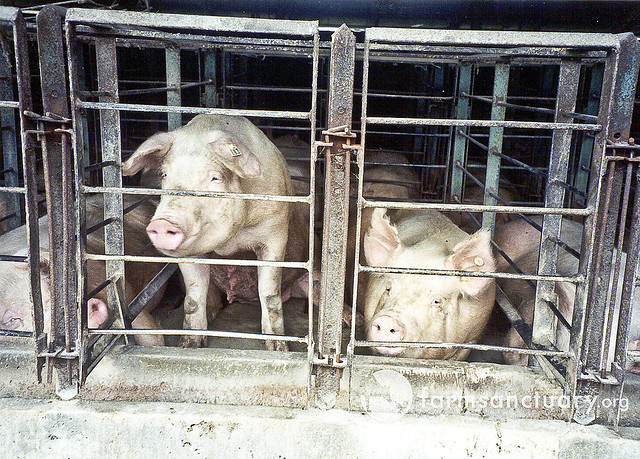 Every now and then, animal advocacy groups like Mercy for Animals release undercover videos of factory farms. In fact, they released an investigation of Pipestone Systems here in Minnesota just last fall.

These undercover videos help us to see for ourselves how animals are treated in these facilities.

Eager to make us feel at ease with what they do, some producers want us to resist the idea that animals are raised on factory farms. They ask instead that we think of all farms simply as farms. No doubt they hope to encourage the kinds of images that go along with the idea of a farm – places where we are asked to think of farmers as doing what’s best for their animals. If we want an accurate image of animal agriculture, though, we’d do well to resist.

We’re often asked to see the decision to move animals inside as a kindness, since inside they’re spared from extreme weather. We aren’t told that confinement helps producers save money on feed. Animals who can’t move don’t need as much food as animals who can.

And let’s think about what happens to animals inside.

Mother pigs are confined for months at a time in gestation crates, cages so small that the pigs trapped in them can’t turn around. Baby pigs have their tails and testicles cut off without pain relief. And piglets who aren’t growing fast enough or who are in need of medical care are killed by being slammed head first against a concrete floor.

Eager to put us at ease with these practices, those in the industry try to convince us that they do these things for the sake of the pigs. But they leave important parts of the story out.

We’re told gestation crates help prevent aggression that arises when sows are raised in groups. We aren’t told that research shows this aggression subsides after only a day or so and that after a week the sows form stable social groups.

Research also shows that aggression between the sows poses a threat to the producers’ bottom line — when you introduce sows into groups after they’ve been artificially inseminated there’s a risk that some embryos won’t implant.

We aren’t invited to ask whether the brief period of aggression and the stress that comes from being able to interact meaningfully with others might be worth it for a sow when the alternative is nearly four months of confinement in a gestation crate.

We’re told that slamming the heads of baby pigs against a concrete floor is a fast and pain free way to kill them. We aren’t invited to ask why we would never consider euthanizing our cats or our dogs like that.

We’re told cutting the tails off of baby pigs prevents them from chewing each other’s tails off. We aren’t told that tail biting only becomes a problem in confinement, where the pigs being bitten are unable to run away.

We aren’t told why baby pigs have their testicles cut out. It’s done because leaving pigs intact can impact the taste of their flesh.

We aren’t told that baby pigs are denied effective pain relief in cutting off their tails and testicles because it would cost too much. Painkillers and vets to administer them, after all, aren’t free.

We’re often presented with a false dilemma. We’re told we can either save some money by eating pigs raised in these awful ways or pay more and eat pigs raised differently. We’re liable to forget the other alternative — quit eating pigs altogether.

Producers will point out that the practices I’ve described are standard in the industry. But this response  is empty. The fact that practices have become standard doesn’t make them morally acceptable.

It would be unthinkable to do these things to our cats or our dogs. Not only does the law forbid it but so does a basic interest in showing kindness and compassion toward our fellow creatures.

And aren’t pigs our fellow creatures too?

Jeff Johnson is a philosophy professor at St. Catherine University, an active volunteer with Compassionate Action for Animals, and a member of the CAA board of directors. This article was first posted on his Tumblr blog in response to a recent article in the Star Tribune.