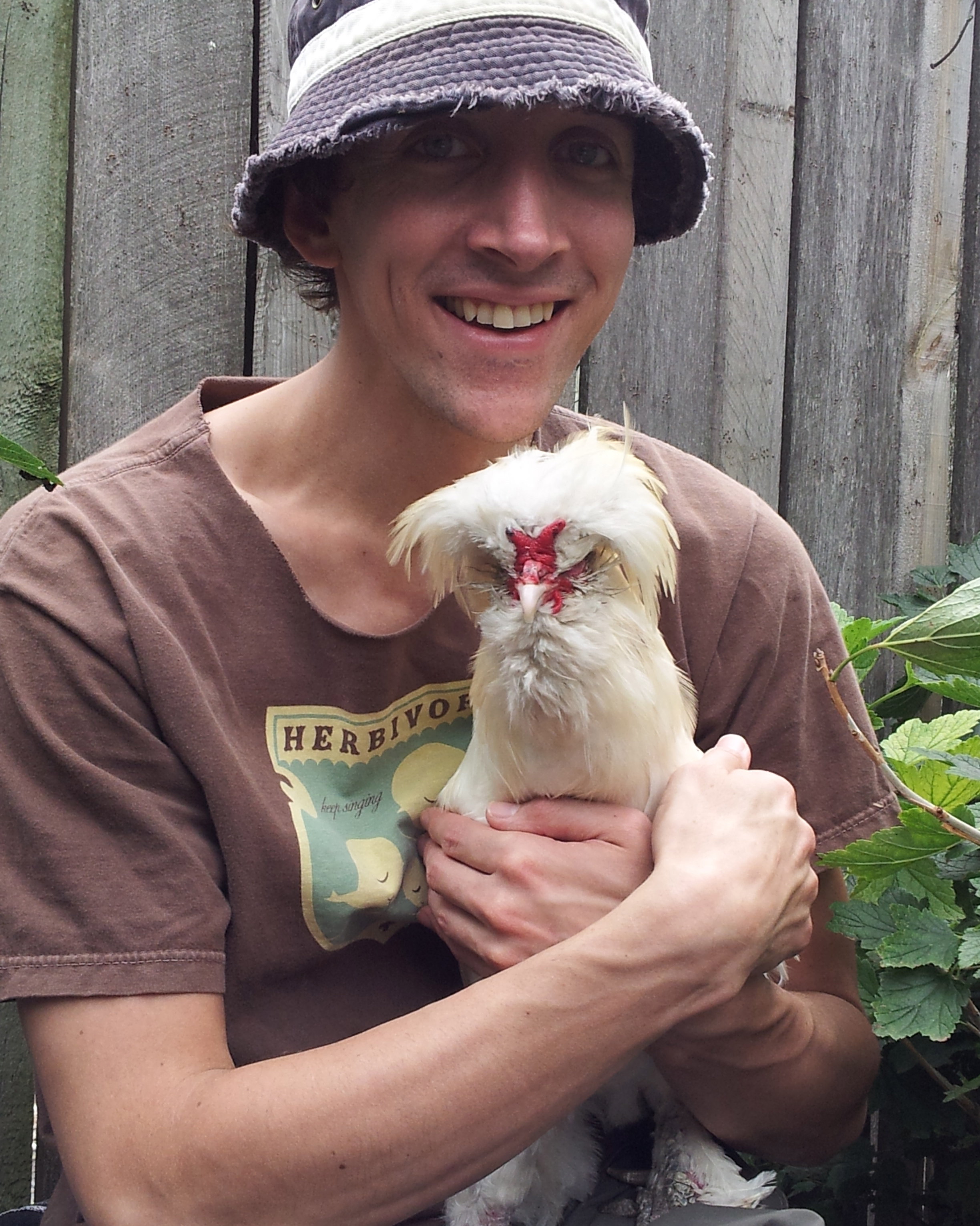 Justin and Obie at Chicken Run Rescue in 2014

Compassionate Action for Animals recently hosted a tour of Chicken Run Rescue, a chicken sanctuary in Minneapolis. Being on staff for CAA, I went along. Of course, I was also interested in seeing the chickens. I had been to a farm animal sanctuary once before, but it had been a long time since I had been up close and personal with these less familiar species of animals. I live with two cats, and I’m very familiar with their ways. But chickens, cows, turkeys, goats — they’re all entirely different species and represented by a myriad of individuals who are each so fun and fascinating to get to know in person.

At the sanctuary, I got to hold one chicken who stayed on my lap for a few minutes, or at least long enough for this picture to be taken. This little guy, a rooster named Obie, is an “ornamental” or designer chicken, bred to be pretty, funny, or cute. The physical abnormalities bred into him can create health problems that prevent him from being able to survive in the wild. For example, Obie has extra toes and his foot feathers often break, bleed, and get infected.

Holding Obie reminded me of holding one of my cats. They’re about the same size. They’re both soft, though one has feathers and the other has fur. And they’re both warm; their hearts beat just the same. Some like to be held more than others, but, unlike a cat, the chickens don’t exactly jump off your lap; they fly off! (The flapping can be a little startling.)

A few days after the visit to the sanctuary, I was going to post some fun “Throwback Thursday” picture on Facebook, and I found this picture from 1994 of me with my cat So-hi. Yes, I had some of my senior pictures taken with my cat. I remember So-hi as a friend. During my difficult youth when I felt like an outsider in many ways, I felt an unconditional love and acceptance from So-hi that I rarely found elsewhere.

Yet, while I was so fond of my cat So-hi, I was regularly eating chickens, those chickens who, like cats, can feel and have desires. They too have a beating heart and a will to live. I didn’t make this connection until many years later, when I was 24 and my beloved So-hi passed away in a house fire. I felt very sad about her death and would occasionally wake in the middle of the night after dreaming that she was meowing at my bedroom door as she once had.

Not long after, I was cooking for myself and made the connection. Handling the raw chicken flesh, something didn’t feel right. I started to wonder how my cat So-hi was essentially any different from from this chicken I was about to eat. How can I grieve for the death of one but then pay for the death of the other?

Of course, this part of my story — how I transitioned to going vegan — is a story unto itself. But when I made this connection between the animals I called friends and the animals I called food, I had a compelling impetus for change. Supported by my intention to follow my heart, to live from love, and to be kind, I made my way to making more compassionate food choices.

Today is “Throwback Thursday,” and I look at these pictures side-by-side. The parallels are evident now, but they weren’t always so clear. Twenty years have passed, and my vision of the world has changed dramatically. Over that time, I’ve widened my circle of compassion.

Thankfully, we have more and more resources available to help support our awakening to these parallels between the pets we adore and animals we eat. From farm animal sanctuaries like Chicken Run Rescue to undercover investigations posted on social media, we are surrounded with reminders that all animals, not just our dogs and cats, deserve compassion and respect. Each of them can feel. Each of them has desires. Each of them has a beating heart and a will to live.