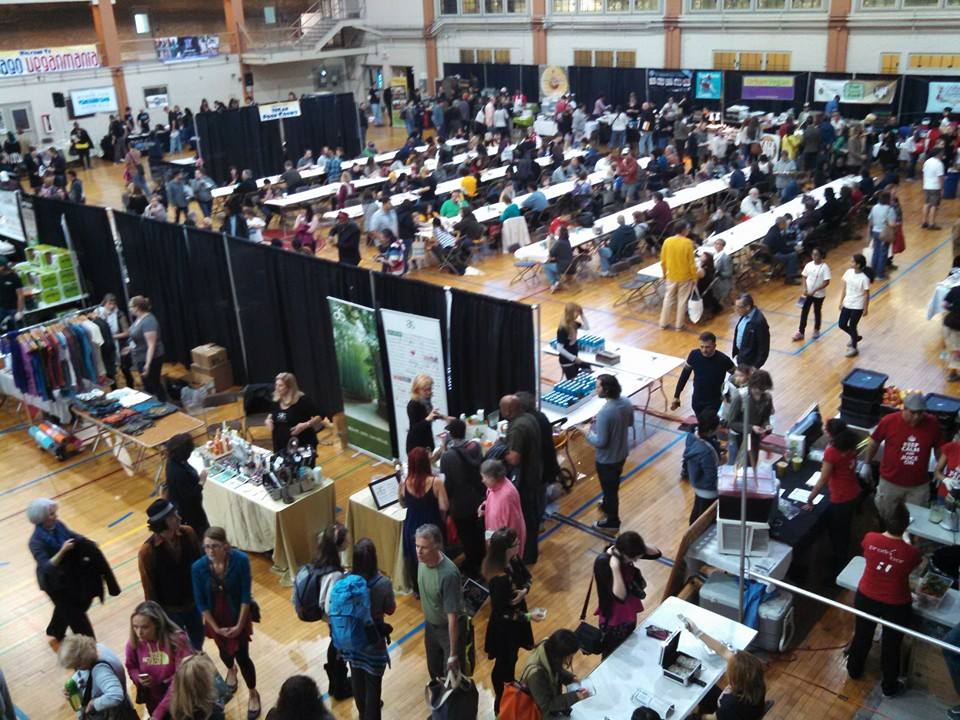 It was a feeling of connection, of being in the right place with like-minded people. On Saturday, October 11, about a dozen Minnesotans went to Chicago VeganMania 2014. This event is similar to our Twin Cities Veg Fest in that it has exhibitor booths, cooking demos, speaker presentations—but, well, it’s in Chicago. And it’s a little bigger. The event drew 4,000 to 5,000 people. We arrived early before the doors opened and enjoyed the beautiful weather waiting in line outside as locals handed out fliers and coupons to those in the crowd.

Where do you start at an amusement park? That was the feeling I had. There was so much information, so many things going on all at once. We visited some of the exhibits during the first hour. There were T-shirts, sweatshirts, bumper stickers, soaps, cosmetics, non-profits, toys, popcorn, nachos, and books. One of the book tables was even selling Mistress Ginger’s cookbook! (Mistress Ginger is local to the Twin Cities and gave a cooking demo at our own festival a few weeks ago.)

The hardest part was choosing what to do. Cooking demonstrations, speaker presentations, and panel discussions were all offered at the same time. We sampled a cooking demo – Paleo Vegan by Ellen Jaffe Jones –  to learn how to be “primal.” (I enjoyed a raw veggie salad.) We caught the last few minutes of a presentation with Robert Cheeke, the vegan body builder. (He made me want to go work out.) And we saw an interesting panel on the intersection of animal rights and other causes.

And then it was time for the food court. This is where it really hit home that I was in an all-vegan event in a city with numerous vegan restaurants. How do you choose one meal when a number of restaurants including Ras Dashen Ethiopian and Arya Bhavan Indian are all tempting you with their delicious vegan eats? We could choose from soul food, pizza, kale burgers, vegan buffalo wings, and so much more!  The dessert options included Sandi Swiss cupcakes, Chicago Vegan Foods soft serve ice cream, and Robin’s Frozen Fantasy raw ice cream. How does one choose?! The answer: you eat more than one meal.

Not everyone at VeganMania was vegan. I spent an hour staffing our CAA table and invited passersby to watch the 5-minute video showing some of the horrors of factory farming. One woman sat there sobbing as she watched. At the end, she said, “I’m so glad I’m already vegan.”  Most of the viewers were not vegan but said they wanted to be or were transitioning. The key thing was that many of the 4,000 to 5,000 people were either vegan or showed an interest in moving towards a plant-based diet.

The weekend was amazing not only because VeganMania was amazing but also because Chicago offers numerous vegan dining options abound in Chicago. For example, the after party at Dimo’s Pizza was another opportunity to eating more than once; the vegan slices included a Hawaiian slice, mac and cheese pizza, and even lasagna pizza, with a free vegan brownie for dessert if you posted a picture of their restaurant on social media. I was in Chicago for a total of about 36 hours, during which I ate at three different restaurants AND at the VeganMania food court. (I’m ready for that workout now!)

This weekend felt right to me. Respect for animals was a given. Veganism was normal, and I felt very much at home.