So maybe you’ve heard. Laverne Cox, star of the Netflix series Orange Is the New Black, announced last week that she went vegan a few months ago.

This exciting news followed soon after other celebrities announced that they had joined the plant-based brigade: Ruby Rose, Danielle Brooks, Craig Robinson, Edie Falco, Jason Derulo, and the list goes on.

Why do we get so excited when our favorite actors, singers, and other stars go vegan?

It’s promising. We see someone with a huge platform advocating for a vegan diet, and we know how many people will be influenced to consider going vegan as a result. (And we want more people to go vegan!)

It’s normalizing. When famous folks start posting about their favorite vegan recipes on social media, the idea of being vegan becomes that much more the norm. (And people generally like to feel normal!)

It’s validating. When someone who has a huge following chooses a vegan diet, it can help us feel even better about the fact that we went vegan. (And people like to feel good!) 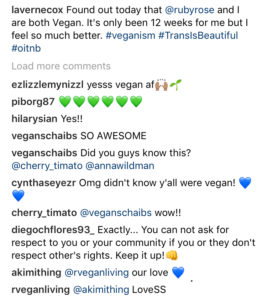 Of course, there’s a flip-side to celebrities going vegan.

They are human beings, just as complicated as anyone else. Who knows exactly why they went vegan or how long they’ll stick with it. And if they don’t stick with it, how will they then talk about that experience with their fans? And in that case, how could what they say affect the image of veganism?

Also, depending on why they went vegan and how they talk being vegan, they could potentially lead people to think being vegan is about being trendy or about losing weight, when it in fact is a social justice movement.

Again, we don’t always know why these celebrities have gone vegan or if they’ll be influential representatives for the animal protection movement, but these are good things to keep in mind in the midst of our excitement. This awareness can inform how we use these celebrity stories to advocate for animals.

In any case, we as animal advocates can take heart and enjoy the thrill that comes with seeing our favorite celebs go vegan. It can give us a boost of confidence and motivate us to get out and speak up for the animals. (And that’s everything!)