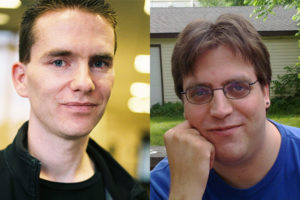 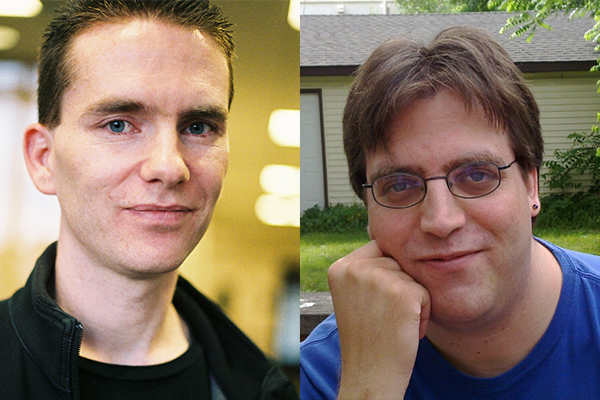 Matt Mackall and Dave Rolsky, two of CAA’s co-founders, are retiring from their board positions. Matt’s last meeting was in September and Dave will officially resign on November 13.

Worried you’ll miss them? Have you always wanted to meet them? Don’t worry. You’ll still see them at events (check the snack table)! And we’ll be honoring them with a special presentation at our December Potluck & Holiday Party.

Nearing the 20th anniversary of CAA, we caught up with Matt and Dave to ask about how CAA was born, their hopes for its future, and where they see the movement headed.

When and how did you start eating a plant-based diet?

Dave: I first went vegetarian my senior year of college in 1994. I took a philosophy course on informal logic. We read about various positions on different topics and analyzed the arguments made for logical fallacies. One of the topics covered was animal rights. We read two arguments: One from Peter Singer (solid) and another “for” the use of animals (which was filled with flaws). I’d always enjoyed spending time with animals (growing up with three cats) and known for a long time that eating them wasn’t right. But reading and analyzing Peter Singer’s writing is what pushed me over the edge.

After moving to Minneapolis for graduate school, I met other vegetarians and vegans through an email list called “Veg-MN” (which Matt hosted on his server). Through our discussions and organized dine outs and potlucks, I ended up hanging out with lots of vegans. Being with them helped me go vegan myself.

Matt: I became vegetarian in my first year of college around 1992 and vegan a couple years later after reading Peter Singer’s Animal Liberation. Having vegan friends and community was key to making it a lifelong habit.

Tell us the backstory about how you both co-founded CAA?

Dave and Matt: Before founding CAA we, including Unny Nambudiripad, were involved with a University of Minnesota group called Student Organization for Animal Rights (SOAR). SOAR was much more radical than CAA, with lots of protests and civil disobedience. While they had a large impact, it wasn’t clear there was a net positive.

After being involved with SOAR for about a year we were feeling tired and frustrated. Right around that time, SOAR’s founder, Freeman Wicklund, published a paper titled “Strategic Nonviolence for Animal Liberation.” This drew on work by Gene Sharp, a political science professor. Sharp’s work analyzes many of the most successful political movements of the 20th century. His analysis aimed to understand how these movements became powerful and enabled the achievement of goals. Freeman’s paper talked about how we could apply that same strategic thinking to the animal liberation movement. Strategic nonviolence was hugely appealing to us because it has a strong theory of how social movements can acquire and use power. It was exactly this theory and strategy that we’d been missing with SOAR. Other people involved with SOAR felt the same.

So, a group of us met regularly for a few months to discuss strategic nonviolence and how to structure activities around its principles. We proposed that SOAR adopt these principles, but many existing SOAR activists did not like this new approach. We quickly realized a need to form our own organization, and CAA was born.

Are there any accomplishments you’re particularly proud of?

Dave: I’m most proud of what CAA is today after a very humble beginning. When we started, our budget was whatever folks at a meeting had in their wallets and could spare. We had very few volunteers, no donors, and no programs. Now we are an organization with hundreds of volunteers, a budget of over $150,000 per year, and we can organize a Twin Cities Veg Fest that brings in 7,000 people! That’s amazing to me.

Matt: I’m pleased that the principles we originally organized CAA around have inspired new generations of activists to continue moving our mission forward. And it’s very satisfying to go to an event like Veg Fest and see thousands of people positively interacting with our message.

Recount a memorable moment for us, will you?

Dave: I think for me one of the most exciting moments I’ve ever experienced was our first Twin Cities Veg Fest. I was extremely nervous before we opened! We’d been working on it for many months, but we really had no idea whether it would be worth it. A line of people waiting to get in started building up about a half hour before we opened. And by the time we did, the line was a few hundred-people long. And people kept coming and coming! I was so happy and relieved that all the hard work had paid off. Looking back, it’s amusing to think how that first festival only attracted 1,200 people or so. Nowadays we’d consider that turnout a disaster, which just speaks to our continued success at expanding our work.

Matt: Perhaps the most dramatic thing we’ve done (back in 2001) was to rescue a dozen chickens and hold a press conference as part of a battery cage investigation. While we were the first group in the US to do this sort of investigation, we now rely on other organizations like Mercy for Animals to do this work while we focus more heavily on outreach and grassroots community building.

Name some the key changes at CAA through the years.

Dave: Hiring our first part-time staff person, Gil Schwartz, was a really big deal. We paid him very little, well under $15,000 per year, but it felt like a lot back then in 2005.

Moving into our current office was a big milestone, since it meant we were finally financially stable enough to pay for a non-trivial monthly expense.

Another big milestone was hiring Unny as our Executive Director in 2011. He was the first ED in our modern history and the first staff person to receive what I would consider a living wage.

And we’re having another big milestone right now. With Matt and I leaving the board, and Unny having left his position last year, all the original founders who were still heavily involved in the organization will be gone. It’s fantastic that CAA is in a such a thriving and successful state that we can do this without any fears.

Matt: One of the hardest changes for the organization was growing past the point where everyone involved knew each other. This more-or-less required someone take on a full-time role just to coordinate the many activities CAA was organizing.

Why did you decide to retire from the board?

Dave: There are two reasons. First, I’ve been very heavily involved in CAA for many years, and I need a break. In addition to my board responsibilities, I’ve helped plan all the Twin Cities Veg Fest events, every fundraising banquet except two, and done a lot of other things in between. It’s time for me to take a vacation from being in charge of things.

Second, I think it’s good for founders to give new volunteers and staff space to shape the organization. I never want CAA to suffer from “founder’s syndrome.” That hasn’t been an issue so far, but it’s best to make sure it never becomes one.

Matt: We’ve long been aware that having a few people hold too much of the organizational knowledge and history makes it challenging for even our most enthusiastic contributors to step into real leadership roles (“founder syndrome”). But I’ve mostly been waiting for our board to grow large enough to not miss me too much!

What are your future hopes for CAA?

Dave: I hope we can keep growing and advocating for animals in the Twin Cities and maybe beyond. I think we’ve done a lot to help build a thriving animal-friendly community in the region and CAA should keep on doing that. I also hope to see CAA continue to find ways to be effective, whether through better technology, new programs such as institutional campaigns, or some new things that no one has thought of yet.

Matt: I’d like to see CAA continue a path of sustainable growth and become a major force in worldwide animal advocacy.

And where do you see the movement headed?

Dave: The animal rights movement has grown tremendously in the time I’ve been involved. The public awareness of animal abuse has skyrocketed, and we’ve taken some baby steps toward real change in the form of Meatless Mondays, bans on particular farming practices, and the increasing availability of vegan food.

However, we still have a huge amount of work to do. The number of animals being killed is still increasing (partly because people are switching from “red meat” to chickens). We’ll know we’re really winning when that trend finally subsides and we see a long-term decline in the number of animals killed for food.

Matt: I think awareness and accessibility of plant-based eating is ever-growing and my outlook for the next twenty years is very positive.

How do you plan to remain involved with the organization?

Dave: I’ll show up at events to do day-of volunteering as long as I don’t have to organize anything. I’ll also be coming to social events like potlucks and dine outs. I’m all about eating!

Matt: Primarily as a donor, event attendee, and snack consumer!

We are hugely grateful to Matt and Dave for their tremendous service to CAA over the past twenty years. We could not have grown as we have without their dedicated support and unwavering passion for helping animals.

At the same time that Matt and Dave depart, we welcome new board members Theresa Zingery and Nathan Gaut. Learn more about them here.

Please join us as we honor Dave and Matt as part of our December Potluck & Holiday Party on Monday, December 18 at the Powderhorn Park Recreation Center. We’ll be celebrating CAA’s legacy and all the wonderful things to come.