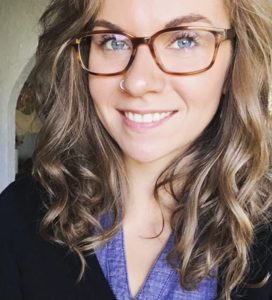 CAA welcomes Lucia Skinner De Gregorio to our board of directors. Learn more about Lucia and how she got involved with speaking out for animals and CAA below.

Lucia is passionate about raising awareness about the cruelty and injustices perpetrated against nonhuman animals. With a spirit of ethical stewardship and service, Lucia hopes to work toward inspiring a more empathetic and mindful society. In her past board role with MN Women’s Consortium, she focused on outreach and strategy and served on a special committee alongside their Executive Director focusing on the development of the Young Women’s Advisory team and organizing their meetings.

Lucia has also been an active volunteer at Spring Farm Sanctuary. She initially became involved with them as a farm hand. She is now a tour guide and part of their marketing team. She also has event planning experience and is excited to become more involved with the Twin Cities animal advocacy community!

Lucia initially connected with empathy, compassion, and mindfulness being at the center of CAA’s mission. “I love that CAA is intentional in its outreach and, in doing so, careful to not create an atmosphere that is non-inclusive,” said Lucia, adding, “I believe that there is always room for growth and improvement where inclusivity in an organization is concerned, and it can be commonplace within the vegan community for it to be taken for granted. I would love the see veganism embraced and recognized as accessible to all.”

Raising awareness in the general public about animal cruelty is certainly high on the priority list. Lucia believes that one of the largest obstacles the animal advocacy movement faces is speciesism or the idea that humans are inherently more valuable than any other species, and that awareness itself of the violence perpetrated against nonhuman animals does not necessarily guarantee change.

Speciesism has brought about the devastating degradation we have inflicted on our planet and on other living beings. “I’ve always viewed the endeavor to resolve injustices to be one best attempted by treating a problem at its source. To me, the injustices we experience within our own species (racism, sexism, heterosexism, classism, etc) are problems built upon the foundation of hierarchical thinking, which is embedded in our cultural––referring specifically to Western/American here––psyche in the shape of humans being inherently superior to non-humans,” said Lucia. “I genuinely believe that if we can humbly and lovingly spread the word that we humans are a part of, rather than apart from nature––we can begin to see a shift in our treatment of said nature.

Lucia loves connecting with others, building community and mutual support, and bridging divides through humility, empathy, and love. Her greatest desire is to do work that protects and defends animals, and she believes that her life’s trajectory will reflect a pursuit of that.

She cares deeply about intersectional thinking and recognizing that the inequalities and injustices we know within our own species are deeply interconnected with those which exist at an interspecies level.

In her free time, Lucia enjoys writing and spending time with Mona the dog. We are thrilled to have Lucia serving as our newest board member. If you see her at an upcoming outreach or community event, be sure to say hello!