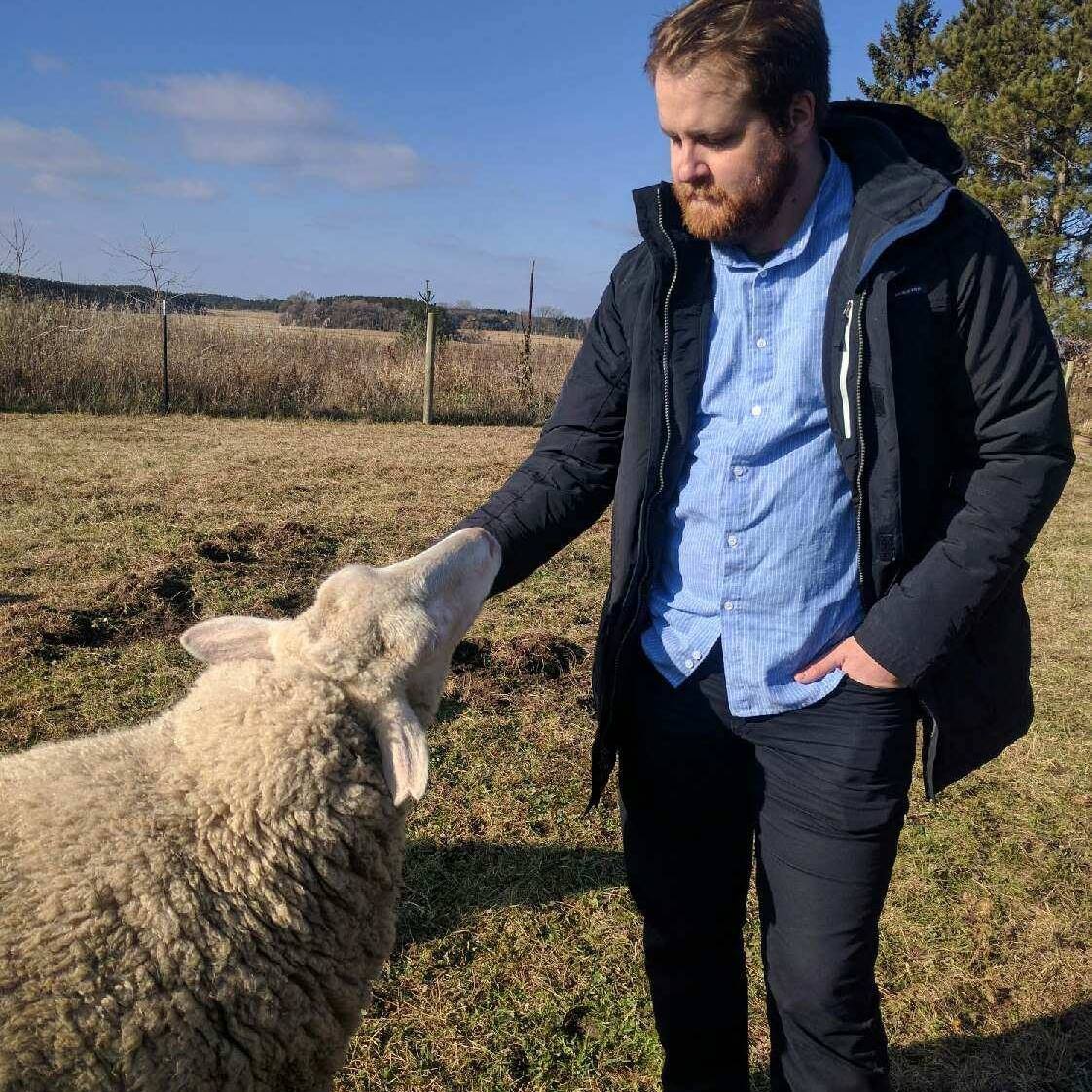 You may have met Abraham Rowe at one of our events or on our blog. Since 2016, Abraham has been heavily involved with CAA, volunteering at our annual banquet, our chili cookoff, postering, potlucks, town halls, Twin Cities Pride, pay-per-view video outreach, food giveaways, and more. In April 2017, he joined our board and then became Board President.

Abraham found out about CAA through a vegan speed-friending event held in a basement in Minneapolis about a week he moved to Minnesota in 2016. “I actually met Laura Matanah (CAA’s Executive Director) there and we started talking about CAA and really connected.”

Throughout his time with CAA, he’s had a chance to see the many faces of outreach and impact CAA has on the Twin Cities community. He’s also helped shape our work.

“As a volunteer, I always liked pay-per-view because you could talk with people about what they saw. Many people are deeply impacted by seeing cruelty footage,” said Abraham. “The reality is that around 90% of the meat sold and consumed in the United States is factory farmed and seeing that up close is super shocking for people.”

“I like the idea of us having a model for food policy work [with Wholesome Minnesota] where we train people who already have trusted relationships with people with institutions to basically make the change themselves in their own community. It’s been really cool to see so many advocates in that space and people get really excited about ways they could bring it into their schools and hospitals.”

Something CAA did last year was a giant strategic planning process led by Laura as she joined the organization as Executive Director. “I think now, we have a very clear vision of what our path is moving forward and where we’re trying to be and what that will look like. I look forward to that being implemented and realized.”

This November, Abraham will move to New York City for his work with Mercy For Animals. He will, however, continue to be involved with CAA.

Abraham runs Mercy for Animals’ US and Canadian Corporate Campaigns Program. His work focuses on getting restaurant companies to adopt animal welfare policies in their animal supply chains to ban cruel practices used on farmed animals.

“The reality is that corporations have the power over the lives of hundreds of millions of animals and an individual company choosing how to source its animal products can completely change the lives of these animals and reduce their suffering and that’s really important to me. It’s not the end goal, but it’s also important to do what we can in the meantime for these animals,” said Abraham.

Animal rights groups noticed that they were targeting corporations individually with separate campaigns throughout the 90s and early 2000s with little action on the corporations’ part.

“One would be going after Costco to try to get them to ban gestation crates, one would be going after Domino’s to try to get them to add vegan cheese––and none of them worked,” said Abraham. “The thing that ended up getting these companies to make these massive transitions was every single animal rights group getting together and saying, ‘We’re all going to do this one thing right now and focus on that,’ and we successfully did that in the US with battery cages for egg-laying hens. The vast majority of the supply of battery caged egg-laying hens will be gone by 2025 when the companies follow through with their pledges and now we’re doing it with chickens raised for meat.”

“Right now, we’re arguing against corporate greed and that’s not an argument that is won often. We can’t become too complacent and just assume that things will work out because there’s cheap plant-based meat in the future,” says Abraham. “It’s going to be a hard fight to get there.”

Personal or consumer boycotts as well as larger campaigns targeting corporations add up to massive collective change for the lives of animals.

“It’s incredibly important to support local community animal advocacy groups like CAA that are interested in nonviolence and are meeting people where they’re at, being compassionate and kind towards others, and demonstrating that this is an accessible, cheap, and pleasant lifestyle,” says Abraham.

“Something that CAA does that’s really unique is it’s focus on empowering individuals to become leaders in their community, to step up and organize events for themselves or host events or take on a committee role. Twin Cities VegFest this year was entirely organized by this volunteer committee, and that’s really cool to see that many volunteers come together to put on this massive event. I like that CAA does individual outreach and then institutional outreach with programs like Wholesome Minnesota because I think that can have a really big impact too.”

“I think the reality is that the blame for factory farming existing lies in for-profit companies wanting to become more efficient and make more money, ultimately, but I also think we have to recognize that we both have to be pushing against that corporate power and one of the best way to do that is consumer boycotts which is essentially what veganism is, it’s a boycott of corporate structures that profit off of using animals in that way.”

His advice for students looking to start a student group? “Get connected. Email a national group or an organization like CAA and ask for resources because there’s a ton of people around who are excited to help and will help. Don’t try to do it alone.”

Abraham plans to visit the Twin Cities regularly and will continue being involved with the CAA Board. He’s looking forward to learning more about the NYC vegan scene and trying out new restaurants, but he’ll miss the Twin Cities scene as well, including May Day Café, Muddy Waters, The Herbivorous Butcher, and On’s Thai Kitchen.

We’re so glad to have Abraham on our board of directors and look forward to seeing how his work in animal advocacy shapes a kinder, happier future for farmed animals.

Are you interested in becoming a member of our board of directors? For more information, contact Laura Matanah at laura@exploreveg.org.