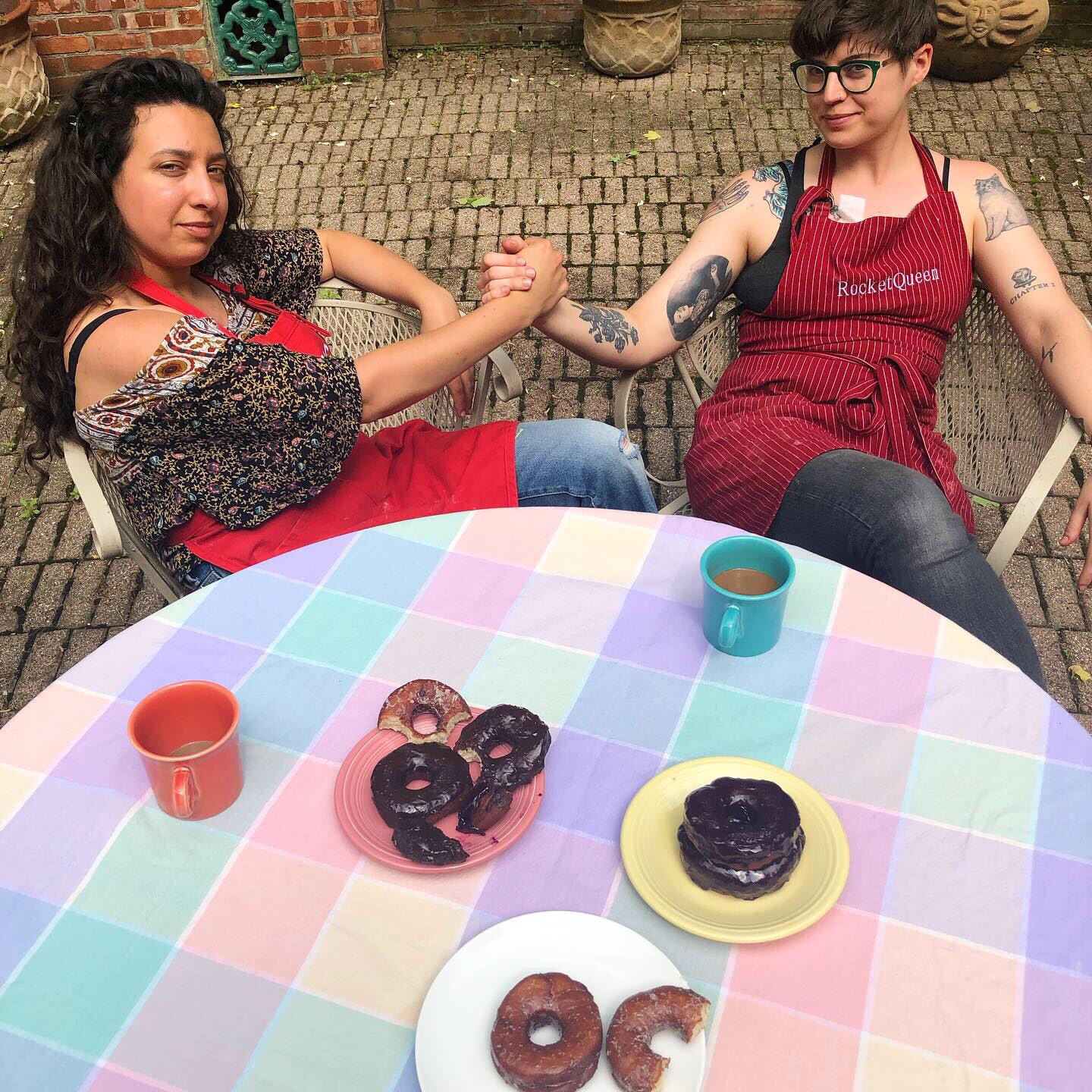 Katherine and Lisa (on right)

Meet Lisa and Katherine, the owners and creatives behind Hark, a 100% vegan, gluten-free, celiac-safe bakery based in Uptown.

The idea for Hark came to the duo when they were in school together over six years ago. They would often create different veganized dishes and baked goods to share with friends. “We were talking about what we wanted to do after we left and the idea was that we would someday have a vegan cafe,” recalls Lisa.

After graduating, both moved to New York—Lisa managed a vegan restaurant and Katherine shortly moved to Minneapolis to work at the Guthrie as a theater artist. During this time, the two didn’t forget about their idea.

“A series of events happened where it was going to be possible for Lisa to move here and we thought, ‘Oh, we could actually do that. It doesn’t have to be a crazy dream where people are talking to you all the time like, It would be so great if you guys opened a place where we could eat your food all the time,’” says Katherine with a smile, “And then she moved here in November and here we are.”

So far, the two have been making their gluten-free, vegan sweets and savories—including bagels, donuts, cinnamon rolls, and king cakes—for private events (including a house show), pre-orders, and pop-ups and plan to have more items available for pre-order soon, including cheese.

“I ferment vegan cheese, like brie, blue cheese, and goat cheese, and in order to sell that we have to have other licenses that we don’t have yet. So that’s next,” says Katherine. “I have a little fermentation fridge in my house—I bought a wine fridge because you can temperature control them so that it’s stable and safe to eat and right now I have four wheels of brie in there that are a mixture of macadamia and cashew and then I have five or six blue cheeses in there—it’s cool, it smells great.”

Worth noting, Hark in its original ideation wasn’t going to be gluten-free—the duo added that as an element after Katherine found out she has Celiac Disease a little over a year and a half ago. “It severely limits the amount of things you can eat. It’s not just like, ‘I’m gluten-free but I can still eat out.’ In fact, I can’t eat gluten-free things at places because cross-contamination is deathly dangerous,” explains Katherine. “So a lot of it was me going, ‘Ah, I wish I could eat my favorite pies and cinnamon rolls and donuts again.’”

Bagels were one of the things the duo started with. “Most gluten-free baked goods have eggs in them,” explains Katherine, “because without gluten or something to hold it together, most manufacturers use eggs.”

The two have worked quickly to make many of their vegan favorites gluten-free while paying special attention to taste and even diving into research into the chemical structure of different ingredients to create the most balanced blend of flours for their gluten-free flour blend and their cheeses. Everything else is made from scratch too, including the soymilk, vegan butter, and mayonnaise they use in their recipes, and they put each recipe through a number of tests before they deem it ready to share.

Neither studied chemistry in school—they’re just passionate about their food. “It’s a good thing that we’re nerds,” says Lisa with a laugh.

After their experiences living in New York, the two hope to bring vegan bagels to Minnesota. Katherine starts, “To be able to just go out and get a tub of cream cheese and some lox and bagels and bring it back to your apartment for brunch—” “—is so a thing in New York,” finishes Lisa.

The two are in the process of looking for a brick and mortar that serves as a neighborhood hang out spot for vegans and non-vegans alike and carries ready-made items like blue cheese dressing (or blue cheese cheesecake!) as well as bagels and cream cheese and other plates to enjoy in-house or out. “We both have the sneaky approach to veganism with folks—we like to give them a friendly introduction to incorporating vegan food in their life,” says Katherine.

Lisa adds, “The place that I worked at for a long time in New York was a vegan fast food place and it was the same idea but from a different angle—how do we make something accessible and approachable for people who aren’t vegan but are kind of curious about plant-based or just want to try something different. I think that’s the goal.”

“Yeah, in addition to vegans being able to enjoy food they really didn’t think they would be able to have again,” says Katherine. “We did a first taste of the blue cheese I’ve been making the other night and I never thought I would get to eat that flavor again. It’s creamy, smelly, so blue cheesy.”

Can’t wait to try something from Hark? Right now, you can order cinnamon rolls, bagels, and donuts. Email harkcafempls@gmail.com to place your order and follow them on Facebook for updates.