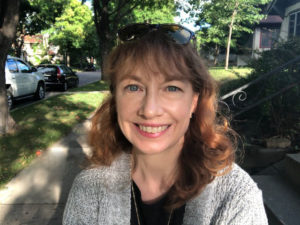 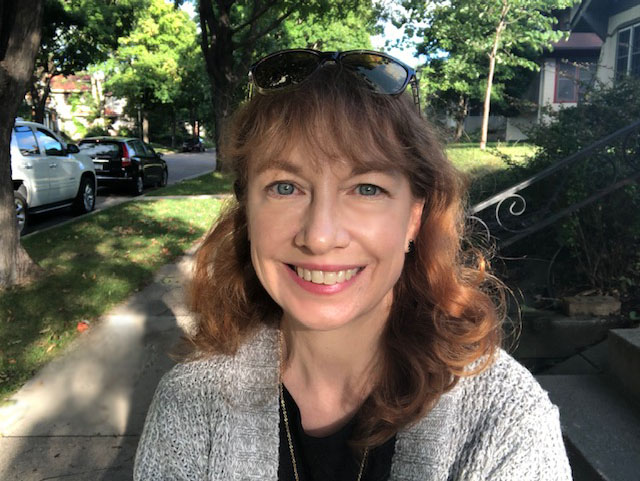 This summer, Compassionate Action for Animals (CAA) announced the hiring of a new Communications Coordinator, and now we are excited to introduce you to Sandy Hitchin!

Sandy began working with CAA on August 10, joining us as our previous Communications Coordinator, Emily Nyberg, transitions into a new role as Design Director. Sandy will be handling our emails, social media, and the content of our annual magazine and other materials. She is excited to bring her professional skills to CAA’s mission of encouraging people to cultivate empathy for animals and move toward a plant-based diet.

Sandy’s journey to plant-based eating has been a gradual one. She was first introduced to vegetarian eating decades ago through college friends. It was then that she began to seriously question the widespread cultural blindness to animal suffering. An animal lover since childhood, it never made sense to her that we could revere and befriend our family pets while causing mass harm and suffering to the animals on our plates.

Sandy credits her two dogs, Wilbur and Barclay, for inspiring her commitment to a vegan lifestyle. The experiences she had with them taught her that they, and creatures like them, are capable of profound empathy and deeply felt acts of service. She remembers Barclay running to her aid when she teared up over sad news, and how, without any training, Wilbur closely tracked her safety during long walks in the wilderness. Wilbur and Barclay are no longer with us, but they certainly did their part to demonstrate to Sandy the rich world of feeling and intelligence that non-human beings possess.

Now in her second year of a completely plant-based diet, Sandy enjoys cooking compassionate meals for her friends and whipping up a fruit or veggie smoothie several times a week. To those who are interested in plant-based living, she recommends starting with small choices and scaling up at a pace that works for you.

When she’s not working, Sandy volunteers with dogs locally and with rescued animals at the Best Friends Animal Sanctuary in Kanab, Utah. She also writes essays and poetry and is in the final stages of earning her yoga teaching certification.

Please join us in welcoming Sandy to the CAA team!