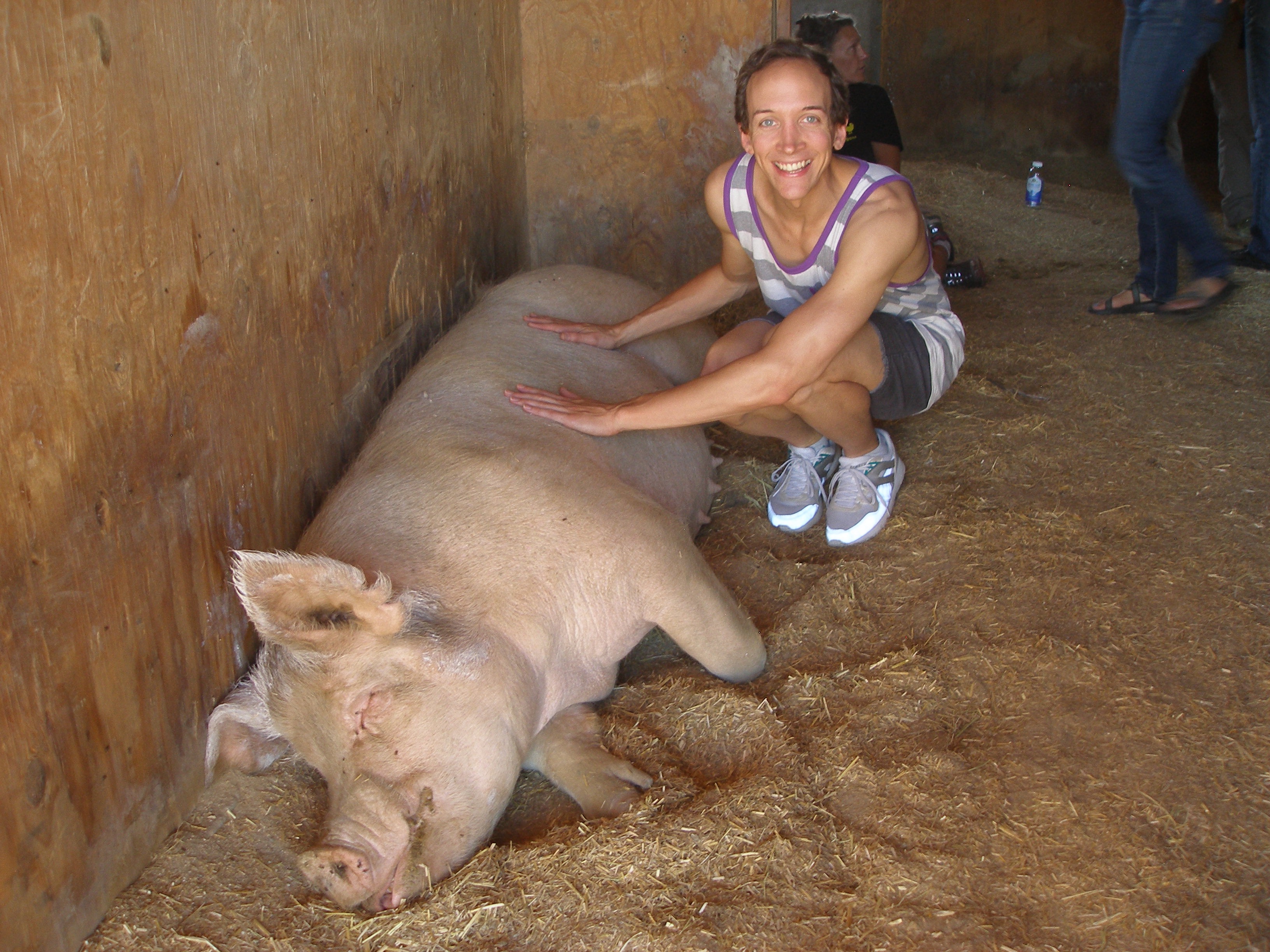 Justin and Sophie at Farm Sanctuary in LA

A bunch of us from CAA recently attended the Animals Right National Conference in Los Angeles. We spent four days attending informative and inspirational sessions, networking with others in the animal protection movement, and enjoying some of the great vegan eats that LA has to offer. As the cherry on top this vegan ice cream sundae, on the day after the conference concluded, many of us went on a tour of Farm Santuary. Meeting the rescued animals was perhaps the ultimate inspiration.

Having been to the conference twice before, I was eager for new information. As someone who works full-time for CAA, I’m routinely immersed in our mission, and I was most interested in being exposed to different perspectives, particularly those that include more confrontational approaches to activism. For this reason, I attended talks by Lauren Gazzola, who advocates for not avoiding “looking bad” as vegan, and Wayne Hsiung, who leads the controversial Direct Action Everywhere. Hearing these other viewpoints was enriching, as it gave me an opportunity to better understand the spectrum of approaches to animal advocacy and social justice.

In addition, I was especially motivated hearing Dr. Melanie Joy speak on the subject of sustainable activism and how to nurture a resilient organization. That information I will surely make use of, not only for myself, but also as a way to support our volunteers.

Each of us who attended the conference got something different out of it, and each of us brings back some unique inspiration that will surely infuse our Twin Cities community with a renewed approach to advocating for farmed animals. Here’s a glimpse of what some of our volunteers and other staff members experienced at the 2016 Animal Rights National Conference:

I found the conference to be fun, rejuvenating, comprehensive, inclusive, and sophisticated. After advocating for animals in near-isolation for two decades, I’ve recently reentered the animal rights community. In the past few years, I’ve seen glimpses of the movement’s transformation. This conference has given me even more awareness of this progress and has restored my hope in how humans are reinventing our relationship with animals. I am grateful for finding inspiration to return to public advocacy, which will surely enhance my work as a humane educator and vegan chef.

The 91-Year-Old Vegan by Kathleen Keene

One of the most memorable moments for me was meeting a 91-year-old Dutch woman who came to the CAA table. She had been vegan all her life because her father suddenly didn’t want to eat animals anymore, and that caused quite an upheaval in the family. Eventually, she and her whole family eschewed eating animals altogether. And she was quite spry for 91! At the end of our chat, I gave her a knuffel, which is Dutch for hug!

Networking, the Future of Food, and the Animals Themselves by Dave Rolsky

The best thing about the conference is always the people. I go each year to connect with others in the movement and learn more about what they’re up to. The session I found most exciting was a panel discussing the future of food, specifically cultured meat, egg whites produced by yeast, and meat alternatives. Finally, visiting Farm Sanctuary after the conference was a good reminder of why our work is so important. Meeting individual animals reminds me of all the other animals suffering in factory farms who need our help.

Renewed Hope in a Violent World by Brita Bengtson

I think we can all agree that 2016 has been tough. I entered the conference wondering if it’s worth working for any cause in such a violent world. I left the conference uplifted by new knowledge of all the progress being made for farmed animals: new outreach technology (Animal Equality’s iAnimal project), new food technology (plant-based and clean meats that don’t require any animal use), legislative victories, and much more. I’m hopeful again that we may someday achieve peace for all beings.