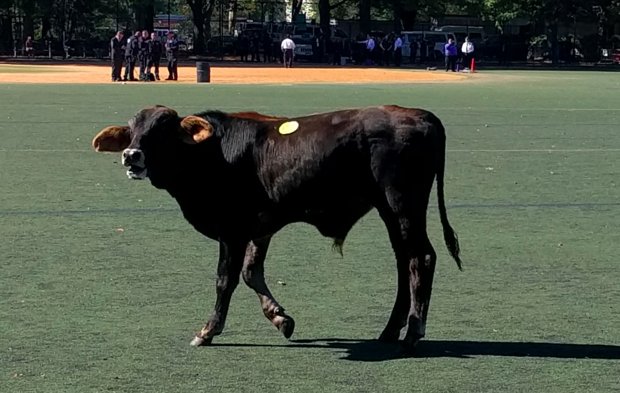 Often in the animal protection movement, we’re encouraged to be the voice for the animals, speaking up for them. And the animals are sometimes referred to as “voiceless.”

But animals call out for their freedom in a variety of ways. Maybe it’s with their actual voices, such as a mother cow calling for her baby once he’s been taken away. Or maybe it’s through their physical actions, with their obvious struggle to get free from what ties them down or keeps them caged.

Every now and then, one of them is able to free themselves, and the world takes notice.

This happened last week in Brooklyn. A calf managed to escape from a slaughterhouse and ran through the streets of New York. The media grabbed onto the story, and people of all stripes, vegan or not, were rooting for the baby bull, hoping he wouldn’t have to go back to the slaughterhouse.

And good news, there’s a happy ending for Shakar, the baby bull. He now lives at Skylands Animal Sanctuary and Rescue, where he is gradually adapting to his new surroundings.

Those of us in Midwest aren’t unfamiliar with these types of stories.

Last April, Wally the pig made big news when he jumped from a moving truck on his way to a slaughterhouse. And the truck was going 70 mph! Now, what does that say for Wally’s desire to be free?

Fortunately, Wally survived his tumble and now lives at SoulSpace Farm Sanctuary in Wisconsin, where he’s free to enjoy his life. (And we can visit him!)

Yes, animals have voices. And they take action however they can. We can take our cue from them when we listen and when we watch. They’ll tell us and show us what they want.