2004 marked a year of monumental growth and expansion for Compassionate Action for Animals. We have brought the message of compassion to tens of thousands by promoting vegetarianism. Each new vegetarian has the potential to save thousands of animals from a lifetime of suffering and eventual death. Through this outreach and your help, CAA has turned into a powerful force of compassion towards animals in Minnesota.

We expanded our college outreach program to include eleven schools beyond the University of Minnesota, including Hamline, St. Thomas, and Macalester. Through this program, we distributed to students tens of thousands of brochures on vegetarian eating.

At the University of Minnesota, we increased the debate on animal issues by bringing noted speakers such as Carol Adams and Tom Regan to the campus, drawing hundreds of people. As part of a week-long series of events, we showed the provoking and powerful film Peaceable Kingdom to over 170 people. Almost 350 people pledged to be vegetarian or vegan during that week, many of whom are still vegetarian or vegan today. 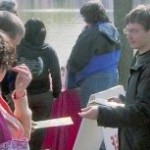 In an effort to reach out to as many youth as possible, we staffed information tables and distributed brochures at concerts and festivals throughout Minnesota, exposing thousands to the shocking reality of factory farming.

None of our work on behalf of animals would be possible without your support. As an all-volunteer, effective organization, every dollar you donate to CAA and every hour you help is put to good use spreading a message of compassion for all.

Thank you for your help in making this our best year yet,

Your friends at CAA