The continued commitment of our supporters has enabled Compassionate Action for Animals to make its mark in the Twin Cities this past year, building a wide community of allies and bringing attention to animal issues. With a growing volunteer and member base, we have become one of the most powerful forces for farmed animals in the Midwest. 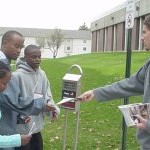 Over the course of 2005 we continued our educational outreach by directly handing out over 60,000 brochures on vegetarian eating, mainly to youth—the most receptive demographic—at schools and concerts. Five speakers, including Erik Marcus and Dan Piraro, gave powerful presentations to hundreds of attendees on topics such as effective animal advocacy, and vegetarian nutrition. 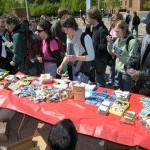 Beyond just providing information, we enticed thousands of people to give vegan food a try at our food giveaways. During our kick-off food showcase for Veg Week, students dined on tasty snacks and had the opportunity to pledge to go vegetarian or vegan. Nearly 600 individuals pledged to go veg for a week!

A follow-up survey sent to the pledgers showed that it was an enriching experience for them, with many vowing to continue eating cruelty-free. One pledger wrote, “I am a vegetarian now. This inspired me to take an active role in my food choices.”

Throughout the course of the year, volunteers organized a host of community building events and activities, including dine-outs, potlucks, and even a camping trip. At the same time, we provided numerous opportunities for individuals to channel their passion into effective action, with regular volunteer opportunities and inspiring workshops.

Perhaps the most exciting event of 2005 was the launch of our No Battery Eggs campaign, urging the University of Minnesota’s food services to discontinue their use of cruel battery eggs, and join over 70 other colleges in purchasing only Certified-Humane eggs from cage-free hens. Already, the Minnesota Daily and the Graduate and Professional Student Assembly (GAPSA) have officially endorsed the campaign. The success of this campaign could deliver a major blow to factory egg farms, and encourage other schools around the country to follow suit. 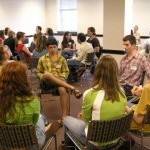 We are also excited about our new hire, campaign coordinator Gil Schwartz. Gil’s primary responsibilities are to empower volunteers, and help them organize the group’s activities. Gil is a long-time volunteer with CAA, and began as an employee in August of 2005.

Momentum for wide-spread social change is underway. None of this could have been made possible without the tremendous energy and creativity brought forth by our dedicated volunteers, and your generous financial support. With so much going for CAA and the movement, 2006 is bound to be a bright year for the billions of farmed animals who depend on our vigilance.

Thank you for helping us create respect and justice for animals in our world,

Your friends at CAA