This past year has been a time of change for Compassionate Action for Animals. Several key volunteers left the Twin Cities in the summer of 2006, leaving new challenges and opportunities. Fortunately, our Campaign Coordinator, along with our core volunteer group, has stepped up to the increased responsibility of organizing events and getting the word out about our mission.

As always, our direct outreach efforts were a major area of focus in 2006. We handed out more than 54,000 leaflets, primarily to youth, the most receptive demographic. Our outreach took us to colleges and universities, high schools, festivals, events and concerts. We also continued our tabling efforts, and we sent out over 800 Vegetarian Starter Kits in response to online requests from around the country. 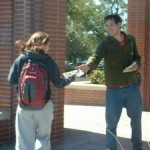 One of the highlights of our outreach efforts was the Midwest Leafletting Tour undertaken by Ben Acaso and Karl Noyes. Ben and Karl visited twelve colleges and universities around the Midwest, many never before leafletted. During the tour these two single-handedly distributed more than 11,000 leaflets. To make this trip easier on the environment, they traveled in a car powered by recycled vegetable oil. Ben called the trip “the most important activism of my life.” CAA is very proud of what these two accomplished. 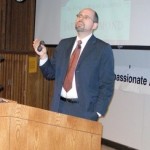 Our most exciting event in 2006 was Peter Singer’s talk on animal ethics. Singer is a world-renowned philosopher and the author of the ground-breaking book Animal Liberation. His talk attracted more than 1,400 attendees, by far our best attendance for a single event. In other events, Dr. Michael Greger spoke on avian flu, and Dr. Marc Bekoff spoke on animal emotions. Attendance at these speaking events was significantly higher than at comparable events last year, with the Bekoff event bringing in 330 attendees. 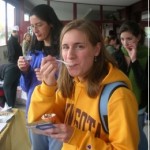 Our annual Veg Food Showcase served free vegan treats to over a thousand people, and 580 people pledged to go vegetarian or vegan for a week. Many pledgers we surveyed said that after this week, they were thinking more deeply about their food choices and were reducing the amount of animal products in their diet or eliminating them altogether. 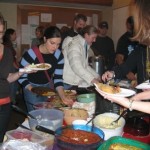 This past year, our volunteers also organized numerous community-building events, including potlucks, dine-outs, a camping trip, and two volunteer appreciation parties. These events are helping to build a vegetarian community in the Twin Cities, making it easier for people to stick with being veg. Our Fourth Annual Turkey-Free Thanksgiving Feast alone attracted nearly 200 people!

Not everything went our way in 2006. Ultimately, our effort to get the University of Minnesota’s food services to discontinue their use of battery-cage eggs was voted down by Residence Hall Association members. Still, we got the word out about battery cages to tens of thousands of students and were able to build a broad base of support, with more than 2,000 students signing our petition, and dozens of others writing supportive letters and editorials in the Minnesota Daily.

VegGuide.Org, our online guide to veg-friendly restaurants, had a great 2006. At the beginning of the year, we hit a landmark 2,000 entries, only to follow this up by reaching 3,000 entries in December. As the guide grows, it is becoming a comprehensive resource for vegetarian eating around the world.

We have done so much, and we still have so much to do. What we’ve done is possible only because of the passion and dedication of our volunteers, and because of your generous financial support. The billions of suffering farm animals cannot speak for themselves. It is only through the compassion of people like you that they have a voice.

Thank you for your support in helping us create respect and justice for animals in our world,Your friends at Compassionate Action for Animals

P.S. Please help us make 2007 even better. Make a tax-deductible contribution to support our crucial work.