As of December 2007, CAA had distributed just short of 40,000 leaflets at the U of M, the fourth largest school in the country. The U has an average enrollment of 50,000students at any time, which makes leafleting there central to CAA’soutreach program. Through leafleting at the U and other schools, CAAprovides important information about animal suffering that has inspired many young people to go veg. 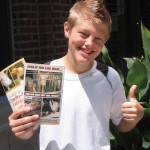 We organized our first ever Minnesota Leafleting Day in the spring of 2007, and followed it up with MN Leafleting Week in the fall. These two events organized dozens of volunteers from around the state to come together and distribute 21,000 pieces of literature, in some cases at schools that had never before been leafleted. Many of the people involved in this event had never leafleted before, and we expect that this experience will show them how easy and effective leafleting can be.

We also had two food giveaways in 2007. In the summer, we gave out free samples of vegan “ice cream” to 200 people at our ice cream giveaway. At our fall food giveaway, we gave out free samples of delicious vegan food to 1,300 people, and at the same time asked them take our Veg Pledge for Veg Week. Six hundred people pledged to be vegetarian or vegan for a week, and many people reported back that taking the pledge had encouraged them to make lasting changes to their diet. One pledger said, “I’ve completely cut out dairy, eggs, honey, meat, and all other animal derived foods from my diet.” And another reported, “Since the week of the Veg Pledge, I have continued to not eat any meat or dairy products.”

As part of our Veg Week series of events, we organized two film showings, a potluck, a cooking/nutrition class, and two dine-outs. We also brought in Gene Baur, co-founder and president of Farm Sanctuary, to speak to an audience of over 160 people on his work and on animal suffering in general. Veg Week is one of our favorite events, combining outreach and education with community-building. Not only do participants learn about the issues, they also get practical information on how to advocate for animals and the opportunity to meet other like-minded individuals.

Building a strong veg community in the Twin Cities has always been an important component to our work, and 2007 was no exception. We organized dozens of social events, including monthly dine-outs, several potlucks, and our newly revived book club. At our Fifth Annual Thanksgiving Turkey-Free potluck we brought together over 120 people to celebrate the holiday in a cruelty-free and festive atmosphere.

Our No Battery Eggs campaign saw several notable successes in 2007. First, in April the U of M Dining Services announced that all liquid eggs, the vast majority of the eggs they use, would be sourced from “Certified Humane” cage-free suppliers. The U of M is the biggest school in the country to make the switch, and with just this change, 28,800 eggs per week are now from cage-free hens. As a result Hamline University also made the switch. Finally, several local restaurants went cage-free due to our efforts, including The Bad Waitress and all five Pizza Luce restaurants Although CAA recognizes that cage-free is not cruelty-free by any means, it is still important to celebrate even small improvements in the lives of farmed animals.

VegGuide.Org, our online guide to veg-friendly restaurants, continued to grow in 2007. By the end of the year, we had reached over 4,000 entries and over 4,000 reviews. On January 1st of 2008, we launched a major new version of the guide, with new features and a greatly improved interface. The site is now easier to use, and most importantly, it’s easier for people to contribute their own entries and reviews to the database. We’ve also recently partnered with Mercy for Animals, another grassroots animal rights organizations, to help us better promote VegGuide.Org.

Every year, we see more and more people embracing our message that animals deserve to be treated with respect and compassion. We want to thank all of our inspiring volunteers for their hard work, creativity, and dedication, and we want to thank you, our donors, for your continued support. There is still so much left to do, and we will continue to call on you for your generous financial support. Help us make 2008 another great year for CAA, and another great year for the animals.

Thank you for your support in helping us create respect and justice for animals in our world.