Thanks for making the second annual Twin Cities Veg Fest a tremendous success! The 2013 incarnation built on last year's inaugural event to share knowledge of where our food comes from, how to be a healthy vegetarian or vegan, and why being compassionate benefits everyone. Here's a rundown of the highlights. 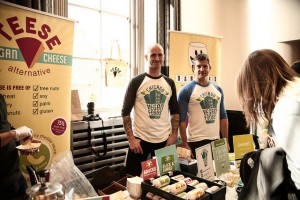 About 2000 people attended the festival this year, a two-thirds increase from last year. A steady stream (more like a torrent) filled the Great Hall in the University of Minnesota's Coffman Memorial Union throughout the morning and kept flowing the rest of the day.

Early attendees were treated to swag bags loaded with goodies and coupons from Alternative Baking Company, Way Better Snacks, Tofurky, and many more! 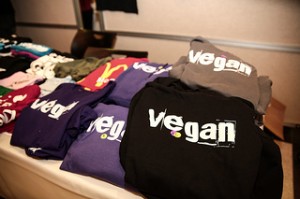 Inside the exhibitor hall, attendees had an overwhelming array of tasty vegan snacks to sample and dishes to scarf down, thanks to our wonderful food vendors. Samples included sausage from Field Roast, seitan from the folks at Upton's Naturals, marshmallows and cheese from Chicago Vegan Foods, and tortilla chips from Way Better Snacks. Oh yeah, we also had nut cheese from Punk Rawk Labs, Bee Free Honee, caramel confections from Comfort Candy, chocolate from Theo Chocolate, bulk snacks from Mississippi Market, Tofurky sausage, chocolate soy milk, Peace Coffee, and So Delicious ice cream sandwiches. That's a lot. It was all awesome. 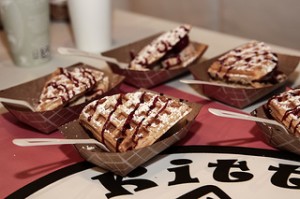 For the hungriest among us, four vendors offered up delicious food by the plateful. Asase Yaa had a dazzling variety of world cuisine, Kitty Corner Cafe loaded Turkish waffles with dark chocolate and fruit, Flamingo impressed with their Ethiopian dishes, and Seward Cafe served up their delicious vegan and gluten-free baked goods. There was much rejoicing.

Indeed, many who had never thought too seriously about vegan food expressed delight at the diversity and tastiness of all the samples. Many vegetarians and omnivores alike expressed a commitment to reduce or remove animal products from their diets. Yay!

And yes, there were exhibitors who didn't serve food. Move2Veg advised attendees on plant-based nutrition, while Ethique Nouveau and Happy Animals sold a variety of animal-friendly goods. Heartland Farm Sanctuary, Minnesota Voters for Animal Protection, Chicken Run Rescue, and others showed Twin Cities Veg Festers how their actions can make a huge difference in the lives and well-being of animals. There's too many to list, so please check out the rest of our great exhibitors.

Upstairs, we had presentations from five compelling speakers. Christine Coughlin, founder and President of Minnesota Voters for Animal Protection, spoke about the importance of political action to protect animals. Suzy Sorensen, owner of Move2Veg, provided introductory information on healthfully transitioning to a plant-based diet. Nathan Runkle, founder and Executive Director of Mercy for Animals, provided a glimpse into the hidden lives of farmed animals and the destructive impact of industrial animal agriculture. Nick Cooney of Farm Sanctuary highlighted ways we can be more effective advocates for animals. Our day of speakers concluded in the afternoon with a talk by Jeff Johnson, Assistant Professor of Philosophy at St. Catherine University, on the ethical arguments that inform our treatment of animals. The talks sparked useful conversations among attendees and piqued the interest of those unfamiliar with a more compassionate lifestyle.

We also held a concert in the Whole in the Coffman basement. In Defence, Alison Scott, Sean Anonymous, and Sleepyhead entertained Festers looking to groove.

Nearly all who attended, regardless of their current dietary choices, expressed overwhelming enthusiasm about the festival. We're happy to provide an environment where a diverse crowd can try new food, gain new information and perspectives, and learn about leading a more compassionate life. The second Twin Cities Veg Fest was better than we hoped and we're incredibly excited about making the event bigger and better next year!

We'll see you there!