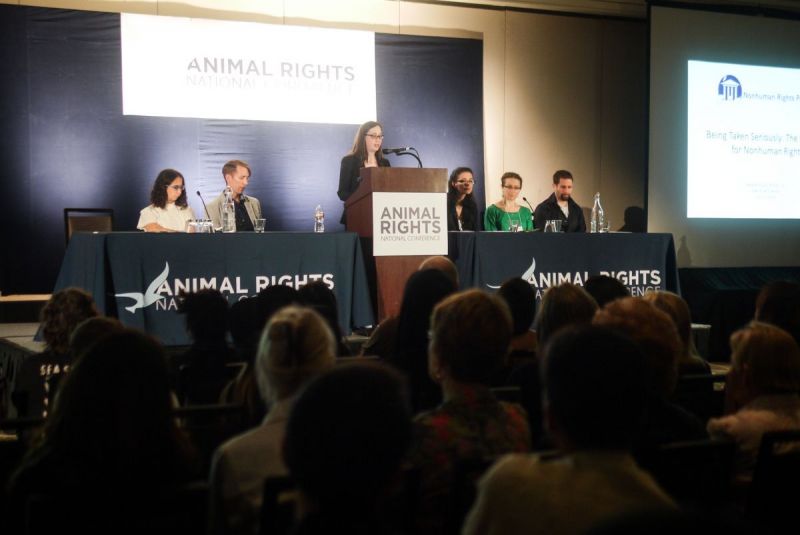 Since 1981, the Animal Rights National Conference has been offering a place for animal rights activists and others interested in the welfare of animals to network and learn more about the movement. The 2014 conference took place in mid-July in Los Angeles and had a number of high-profile speakers and insightful workshops.

First, we caught up with Dave Rolsky, a co-founder of Compassionate Action for Animals, to talk about how the conference has evolved over the years and how he’s seen the movement itself shift over the years.

CAA: Can you tell us a bit about your overall experience at the 2014 Animal Rights National Conference? What is your main motivation for going to the conference each year? What do you hope to gain from attending?

Dave: I had a great time at the conference this year. I sometimes feel like we’re a bit isolated from the larger movement here in Minnesota when we see so much activity on the coasts. Of course, that just means our work at Compassionate Action for Animals is that much more important!

For me, the conference is all about networking and connecting with the larger movement. The conversations I get to have with people at the conference are probably the most useful thing for me as an activist. I talked to a lot of people this year, both people who’ve been in the movement a long time and those who are new to it. It’s great to hear about what people are doing around the country.

I also attended some really interesting presentations. One of my favorites was hearing what Ari Solomon from Mercy For Animals had to say about social media. I also bought some vegan Omega-3 DHA supplements after hearing Jack Norris and Ginny Messina talk about vegan nutrition. If you haven’t done so already, I’d encourage you to check out Jack’s site and follow his recommendations for diet and supplementation as a vegan.

On a personal note, I really enjoyed the donuts sold by Donut Friend in the exhibitor hall. I probably enjoyed them a little too much. This, of course, is not what Jack recommends, so don’t blame him.

CAA: What is the biggest change you’ve seen at the AR conference since you’ve been attending?

Dave: The conference itself is fairly similar, but the attendees are changing a lot. Our movement is growing in size, and this was the biggest conference ever at 1,200 people. I also see a lot more professionalism, both from people employed in the movement and from volunteers. The movement is really starting to embrace the idea that we need to measure our work, rather than just doing what feels right. This is something that CAA strongly believes in, and we’re planning on launching a small research project focused on our own work in the near future.

CAA: As someone who’s attended the conference several times, who do you think would benefit from attending the next one?

Dave: As I said above, for me the conference is more about networking than about the presentations. If you’ve been active for animals for a long time, I think the conference is a great opportunity to find out what other people are doing, and just to connect with other like-minded individuals. Many of the presentations at the conference tend to focus more on the basics, so I think more experienced activists might find some of them less interesting. That said, there are always new things to learn, unless you’re an expert in every possible area of activism.

Of course, if you’re new to these issues, the conference is great for you too. The networking opportunities are just as important, if not more so. You never know who you’ll meet that can help you become a more effective advocate for animals. The same goes for the presentations.

Personally, I wish I had started going to these conferences much earlier in my time as an activist. I didn’t go to my first conference until nearly ten years after I first got involved in these issues. I strongly encourage any new CAA volunteers who are passionate about these issues to consider joining us at next year’s conference.

We also had the pleasure of talking with Kealy Porter, a Compassionate Action for Animals volunteer, who was a new conference attendee this year.

CAA: Can you tell us a bit about your overall experience at the 2014 Animal Rights National Conference?

Kealy: I had an amazing time at the Animal Rights Conference. It was sort of overwhelming not only to try and take everything in that was going on, but also to feel so much camaraderie with so many people I have never even met before. I was eager to learn as much as I could from all the animal advocates, so inevitably it was exhausting, but nonetheless extremely worthwhile.

Kealy: I expected there to be a large resource of people and thus knowledge to be shared, along with many diverse organizations. This was definitely lived up to at the conference. For some sessions with guest speakers I expected there to be a bit more cohesiveness on the topic of the session, but since some speakers have worked with very different organizations or hold very different viewpoints, at times the focus of the session seemed a bit disjointed.

CAA: What drew you to the conference? What did you hope to gain from attending?

Kealy: As a person pretty new to activism, I was hoping to learn from the work of more experienced animal advocates. I also wanted to start networking with activists, as this is really important for the movement and also for me personally as I want to continue advocating for animals. Last but not least, I really also wanted to raise my level of hope for the future of all animals. It is really easy to become discouraged and pessimistic about whether we are making an impact, so I really wanted to gain a larger sense of community in order to rejuvenate my tenacity to help animals by realizing that so much progress has been made, and especially that we are not alone in this fight.

CAA: For you, what was the most beneficial part of the conference? Were there any speakers in particular who stood out?

Kealy: There were so many parts that were beneficial that it’s hard to choose! If I had to, I would say the session about feminism’s place in the Animal Rights Movement. Several women spoke, including Lisa Kemmerer and Lauren Ornelas. All of them stated what feminism meant to them and connected the oppression of women to the oppression of animals. It further solidified my own values when it comes to ecofeminism, and it gave me hope that these important discussions will continue in the animal rights movement.

Kealy: Since there was so much going on, I did feel the need to rest a lot, and I ended up missing out on some important talks. I would definitely plan my time more thoroughly so that I can balance learning with resting.

It was great talking with Dave and Kealy about the conference, and it’s interesting to see the differences in their experiences. If one thing is apparent, it’s that the animal rights movement continues to grow and that the activists involved are becoming more and more passionate about what they do.