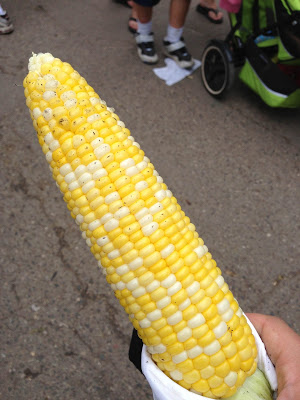 Corn on the Cob!

This article was originally featured on the blog Accidentally Meatless on September 2, 2013.

When my fiance decided to stop eating animals and animal products (go vegan), we thought vegan pickings would be slim at the “Great Minnesota Get Together” (State Fair). To our delight, blogger Midwest Vaygun had our back. She had several years of “gorging” at the state fair in the name of providing vegans a list of fair food options. Thank goodness for upstanding Minnesotans willing to sacrifice themselves for the greater good of our communities. Also, thank you to my parents, friends, and fiance who helped compile the list below. With that said, please do confirm for yourselves that these dishes are vegan and note this list is not comprehensive. In other words, we got full!

There’s a lot to do at the fair, but these delectable treats are worth the $12 entrance ticket alone!

1. Corn Roast (located near the Grandstand) Hold the butter, enjoy nature’s food on a stick in its summer glory. This is a perennial favorite of many.

2. Produce Exchange’s Sweet Dreams Peach (located across the street from the International Bazaar) Before you judge this as not adequately deep-fried or on-a-stick to qualify as fair food, I dare you to tell me you’ve had a better peach. I dream of these peaches all year. Thus, they are aptly named.

3. Fresh French Fries (2 locations: between Adventure land and the Mighty Midway and in front of the Senior Center, west of the Agriculture building) Deep-fried, crisp salty goodness in a bucket. Made with fresh potatoes. There are many imitators, but none compare. The owners of these stands are probably millionaires because the crowds who line up for this must include anyone who likes french fries.

4. Harry Singh’s Vegetarian Roti with Trinidad Scorpion Pepper Hot Sauce (southeast corner of the Food Building) Mild mannered when wrapped in its warm roti shell, this bad boy up  is delicious with a splash of the hottest hot sauce you’ve probably ever had. With the already flavorful curried chickpeas, this is a great meal option. We liked it better than the doubles, but they’re cheaper and smaller if you just want a taste.

5. MN Apples’ Frozen Cider Pop and Fresh Apple Sauce (in the west hall of the Agriculture building) The State Fair is one last summer party before kids head back to school and the leaves start to change. Make the transition to Fall a little more comforting with this refreshing Mr. Freeze-popsicle cider that serves as a bridge between the seasons. And the apple sauce is better than anything you’ll find in a jar at the store. Perfectly portioned and priced at less than $2 each.

Farmer’s Union’s Iced Coffee with a Splash of Soy Milk (near the front gate, west side of Dan Patch) If you get to the Fair early or need a caffeine boost, the Farmer’s Union booth serves J&S Bean Factory coffee which tastes great and offers Pacific Natural Foods’ barista blend soy milk (my favorite non-dairy milk for coffee drinks)

We liked but just didn’t love these options.

1. Strawberries & Creme (Randall and Underwood near the kidway) We couldn’t believe our eyes, but the staff confirmed that the whipping cream is nondairy. The strawberries were slightly tart and cool with a generous dollop of rich, sweet nondairy cream.

2. French Meadows Brown Sugar Scone (Carnes and Underwood) It was more flat than the other scones, almost cookie-like. The flavor was good and made us hope they carry it in store year-round. I don’t suspect it will ever have the crazed following that leads to long lines waiting for the cronut-doussiant, but you can at least people watch the line while enjoying the scone and a coffee.

3. Hamline Dining Hall Pomegranate Pizzazz Sorbet (near the Visitor Center on Dan Patch) Refreshing and cool with the iconic Izzy’s mini-scoop on top. Service was inconsistent, but the sorbet was great. Izzy’s is a favorite local ice cream shop that offers soy ice cream and sorbet options for vegans.

4. Spring Grove Sodas Rhu-berry Soda (on Nelson near the DNR building) We Minnesotans love our rhubarb, but this soda was a little sweeter than we hoped. Heavy Table, which runs a State Fair food tour (not vegan) raves about the lemon sour and thought the rhu-berry and lemon sodas were good offerings.

You’re more likely to score vegan options if you check out the International Bazaar, located on the south side of the fairgrounds. Here are a few tantalizing options:

1. Island Noodles (located in the last row near the stage in the bazaar) Wok-fried soba noodles in a garlic ginger sauce with lots of veggies are a solid meal option. Major bonus points for slicing fresh veggies into each batch. Mmmm…wok-fried broccoli.

2. Cinnamon Roasted Almonds (located a few stalls down from Island Noodles) They were handing out samples and claiming nondairy and gluten-free. If you’re nuts for nuts, give them a try but ask about honey first.

5. Los Ocampos Guacamole and Chips (on the eastern edge of the International Bazaar) The guacamole is served in a generous two-thirds cup portion freshly made with lime, tomatoes, onions, and avocados. If you go earlier in the fair, you’ll see Burrito Mercado in this spot. They offer a chili and lime dusted fresh mango on a stick. We’ve heard it’s phenomenal.

I am not crazy about fried foods. It seems that this makes me an anomaly at the fair. Not to bias the choices, I offer a separate category for the fried items here.

1. Preferred Pickles’ Fried Pickles (southwest corner of Dan Patch and Liggett near the Mighty Midway) Cajun and perfect offerings are vegan if you hold on the ranch dipping sauce. We didn’t check to see if the chocolate dipping sauce was vegan because that combo didn’t sound good anyway. The hot sauce was a tasty addition.

2. Sonny’s Spiral Spuds’ Potato on a Stick (northwest corner of the Food Building) Vegan on a stick option! Another fun way to eat a fried potato, but if you’re only going to do one potato option make it the french fries. If you come with an army, get the potato tornado which is a massive amount of potatoes on a stick and definitely made to share.

Others we didn’t try

Even with a team of six hungry people, you’re not going to get through all the fair’s options.

1. Dole Whip (located across the street from French Meadow) Nondairy soft serve with fruit or a pineapple juice float.

3. Fried Green Tomatoes (on Dan Patch by Crossroads and The Garden)

Warning: The eggplant fries and eggplant tacos at the Sonora Grill have egg in the breading.

236,197 people were at the Minnesota State Fair when we were on an absolutely gorgeous Sunday, setting a new attendance record!

We cannot guarantee that all of these options will be available at this year’s fair, and the locations may have changed. You’ll have to explore the fair for yourself to discover what plant-based options are available this year.