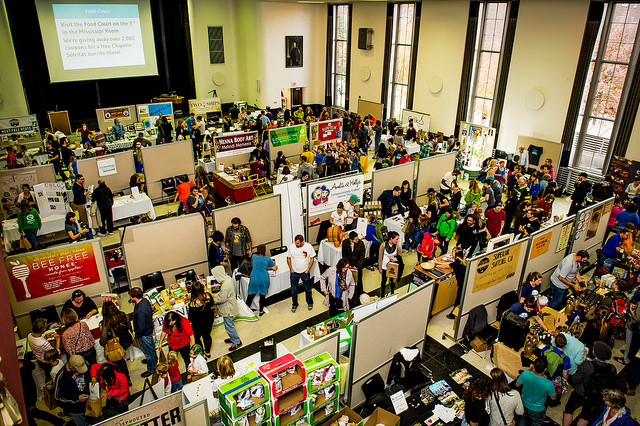 Save the dates for Twin Cities Veg Fest 2016!

Coffman Memorial Union at the University of Minnesota

You might notice that we’re expanding the festival to two days this year, which is very exciting for us. We’ll also be at Coffman Memorial Union again, which is not what we expected, but we’re looking forward to making it work better than ever. Here’s how all this came to be:

We had the best intentions to bring the festival to an outdoor location this year, and until recently we thought we were all set. We had submitted our Minneapolis Parks application as early as we were allowed and then started working with Powderhorn Park, which seemed like a great fit. Liz Kraus, the park’s Recreation Supervisor, was very helpful. We even saw a draft of the itemized contract for the facilities.

Then we got the news. The park has a construction project planned that would conflict with our proposed festival dates. We couldn’t have the festival during the construction, as it would block access to key parts of the park. At this point, we looked into reserving a different park, but by then they were all booked. Drat!

Even though the park didn’t work out for this year, we’d like to thank Liz Kraus at Powderhorn for her efforts on our behalf. We quickly turned the page and started thinking about how we could make another year at Coffman Memorial Union better for everyone. As the event keeps growing, we just knew that we’d have to do something different to accommodate the growing number of attendees, exhibitors, and vendors. And then the light bulb went off…

We’ll turn the festival into a two-day affair! That way, the thousands of attendees will be spread out over the course of two days, making the crowds more manageable. Vendors and exhibitors will have the option to sign up for one or both days. And the expanded time frame also allows for additional presenters and cooking demos.

This next year will be an opportunity to reach even more people with this celebration of compassion. We’ll keep growing, establishing a solid launching pad for wherever we might go in the future. We look forward to welcoming the entire community to what is becoming a great Minnesota tradition, and we certainly hope you’ll be there to join in the fun.