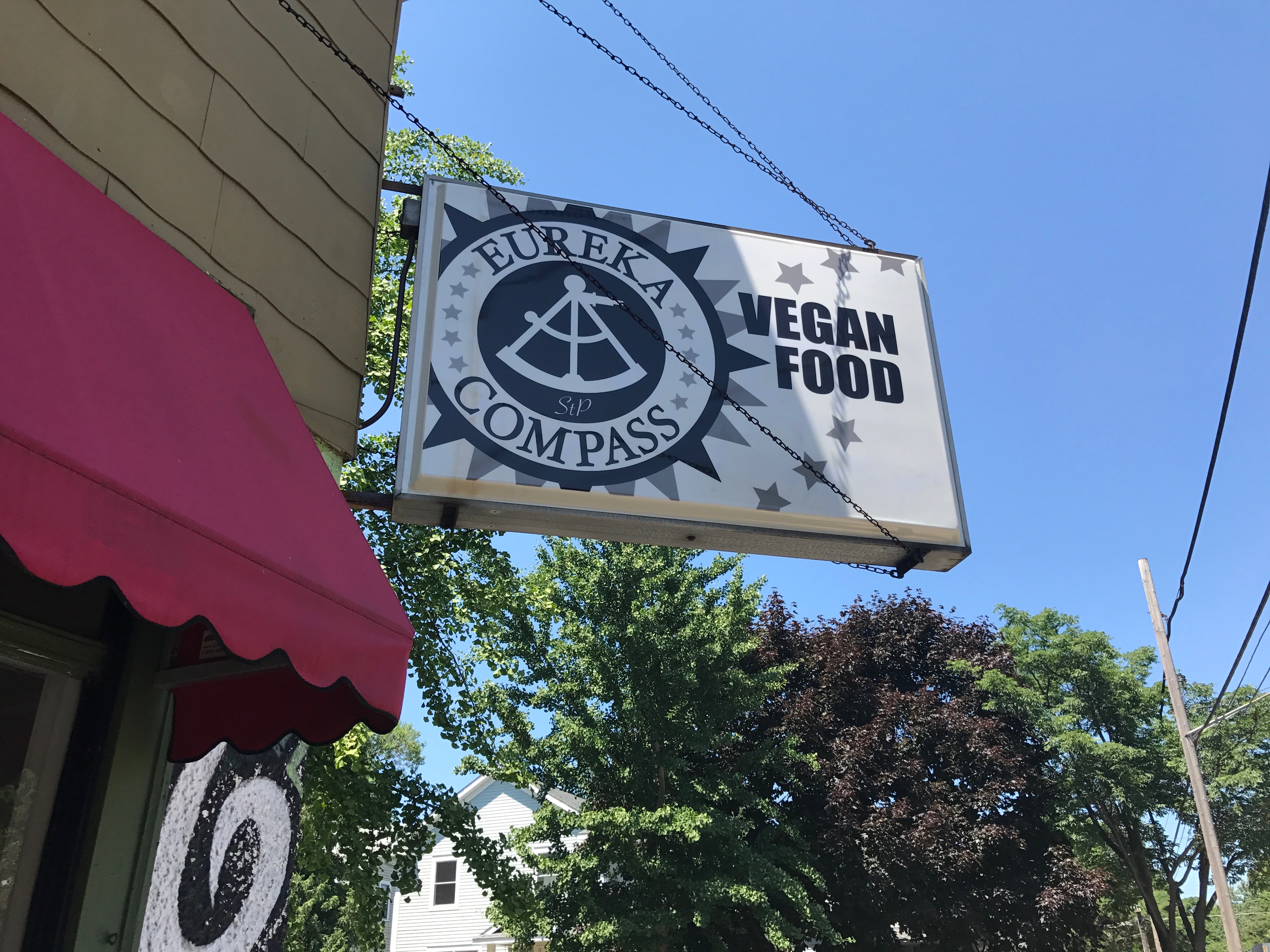 Maybe you saw the Star Tribune article. Or the Pioneer Press article. Or some other article that announced that an new vegan restaurant would be opening in the Twin Cities—and soon! And maybe you caught a glimpse of their vegan croissants in the photos and thought to yourself, “What?! Vegan croissants?!”

Yes, that and more. Chef and sole proprietor Colin Anderson has passion, drive, and vision for an all-vegan (and proudly vegan!) restaurant that serves a residential neighborhood north of University Avenue in St. Paul. Eureka Compass Vegan Food, a mission-driven endeavor, offers bona fide farm-to-table cuisine that’s mostly organic, an adventurous menu that changes from week to week, and a space where hearty conversation with customers is always happening.

On an unsuspecting corner in this quaint neighborhood, at 629 Aldine Street, you’ll find the newly opened work-in-progress. Colin did not expect to be opening a restaurant so soon. His initial vision was just a food cart. But, when the opportunity to take over the neighborhood pizza place suddenly arose, Colin seized the day. It’s been a whirlwind ever since.

While the space is gradually refurbished, Colin offers baked goods in the morning, ticketed dinners on Monday nights, a limited menu of lunch specials, and regular dinners on Thursdays, Fridays, and Saturdays. On the “Five Dollar Fridays,” you can get an entree and beverage for only five dollars. (By the way, the vegan croissants are only available on Saturday mornings, and Colin recommends you get there by 9:30, just in case they sell out, as they often do.)

To cover the cost of initial renovations and equipment, he’s fundraising via Kickstarter, hoping to raise $25,000 by August 5. He’s already more than halfway to his goal. Colin says, “the community deserves a much better space than this.” In addition to covering the cost of an industrial dishwasher, a commercial food processor, and a wooden pastry table, these initial funds will also help to fix up the storage and food prep areas.

Currently, the restaurant’s primary patrons are the folks in the neighborhood, many of whom aren’t even vegan. The spot is not located on a main thoroughfare and doesn’t have a bus line very close by. However, Colin hopes that more of the vegan community will be willing to go the extra distance to support what he’s got going.

Also, since Eureka is so far just a one-man band, the hours fluctuate a bit. It’s recommended that you check their Facebook page to see what the upcoming schedule and menus will be.

At the heart of Eureka Compass Vegan Food is Colin’s vision. He sees being vegan as “mindful consumption,” and that includes an awareness of all the ways our food choices have an impact on our world; Colin supports small farmers and makes genuine connections with those in the neighborhood. He says, “The menu will always change according to the fresh produce that’s available. I get to the farmers market and then decide what I’m going to make for my community.”

We love that this unique vegan restaurant has arrived to offer vegan folks (and non-vegan folks!) an opportunity to enjoy good food that benefits the animals, the environment, and the overall community. Please support Colin’s Kickstarter today and help to make Eureka Compass Vegan Food another great fixture on the Twin Cities’ thriving vegan scene.