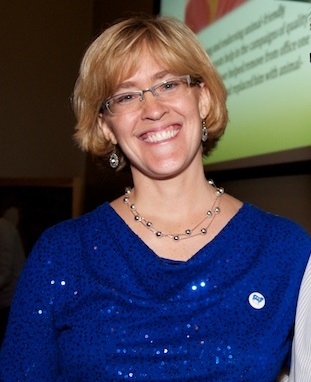 Christine Coughlin, Minnesota State Director of the Humane Society of the United States

We’re pleased to announce the winner of the 2017 Kenny Feldman Animal Advocate Award.

We’ve created this award to recognize a person, organization, or business in our community whose amazing work is pushing the ball forward for animals. This year, we’re giving the award to Christine Coughlin, Minnesota State Director of the Humane Society of the United States.

Born and raised in Minnesota, Christine has been active in the field of animal protection since 2002, with a focus on grassroots legislative campaigns and electoral advocacy. Christine has served on animal welfare policy task forces for the City of Minneapolis, initiated the biannual publication of Minnesota’s Humane Scorecard, and founded Minnesota Voters for Animal Protection, serving as president and executive director until 2014.

Christine’s legislative experience includes working with allies to pass state and local legislation. Her accomplishments include:

CAA will present Christine with the award at Twin Cities Veg Fest 2017 on September 9 at Como Park. The award presentation will take place at 2:15pm under the big tent just before the panel discussion on farm sanctuaries.

This award honors the memory of animal lover Kenny Feldman. He thought animals were to be cared for and allowed to a live a life with freedom. Kenny was a close friend of Compassionate Action for Animals co-founder and first Executive Director, Unny Nambudiripad. He inspired Unny to become an activist. Sadly, we lost Kenny to suicide 18 years ago. From that tragic loss, we were moved to establish this annual award to acknowledge the contributions of individuals who strive to create a more compassionate world.

The Feldman family wants to thank CAA, Unny Nambudiripad, and current Executive Director Laura Matanah for helping preserve Kenny’s memory and continuing his legacy of being an animal lover and activist in animal rights campaigns. To find out more about Kenny, visit the Remembering Kenny Feldman Facebook page.