Turkeys have been synonymous with Thanksgiving for many years. However, many people are unaware of the suffering that these beautiful birds go through on factory farms. In just one year over 250 million turkeys are raised for slaughter in the U.S., 46 million for Thanksgiving alone. These birds are often debeaked and detoed without any form of anesthesia. Turkeys that survive this inhumane treatment are crammed into spaces so tight they are unable to move freely and exercise their natural behaviors.

"Modern" turkeys have been bred to grow at an unnatural rate, leading to even more suffering. In 1965 the average farmed turkey weighed in at around 18 pounds. Today turkeys are reaching slaughter weights of between 28 and 33 pounds. This massive increase in body weight causes severe health problems such as heart attacks and cardiovascular disease. 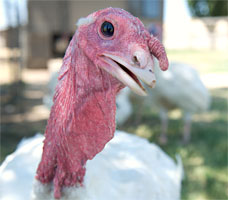 This holiday season, we encourage you to participate in Farm Sanctuary's Adopt-a-Turkey project. Adoptions start at $30 and you receive a certificate along with a picture and description about your turkey!