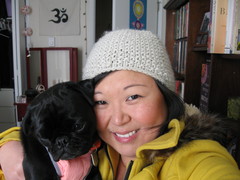 Jin Dalsin has always considered herself as an advocate for those without a voice. While Jin had previously spent much time and passion in the field of animal rights, it was soon after her transition into veganism in which she wanted to find new connections. In her search to meet like minded individuals, Jin came across CAA several months ago when she was searching for groups using the Meet-Up social website. Here she became invovled with events such as the Summer Camping Trip and Vegan After Darks.

It was during CAA Meet-Up events when Jin met Dee Hanson. Jin and Dee soon became friends and were both interested in taking on some volunteer roles with CAA. Jin and Dee mutually decided that taking on a volunteer role would be much more enjoyable and much less stressful if they worked together.

Jin enjoys spending her free time with her pug, socializing at events, cooking, reading and is possibly considering taking up snowshoeing this winter!