Every day, we speak out against animal suffering and needless death. A few months ago, I visited a local slaughterhouse to see first-hand how animals are killed for food. I want to be able to advocate for farmed animals with direct knowledge about how they are killed.

Along with several volunteers, the slaughterhouse I visited was just 30 miles from Minneapolis. They host tours to anybody upon request. I held back tears at the beginning, but for the most part I didn’t express the anguish that I felt at a deep level. I have seen many hours of video footage of animals being killed, and nothing I saw was new to me. Being there helped remind me that the animals we advocate for are not just abstractions, but individuals with feelings and personalities. 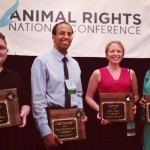 In June, I received the Henry Spira Grassroots Animal Activist award at the Animals Rights 2013 National Conference. This award was given to two activists that have shown the commitment and have contributed significantly to advocating for animals. Receiving the award was humbling and overwhelming. I’m humbled to have had the opportunity to advocate for animals for the last 16 years, including co-founding Compassionate Action for Animals 15 years ago. But my work has only been successful because of the contributions of thousands of volunteers, supporters, coalition partners, and donors like you!

Planning for our second Twin Cities Veg Fest is well underway! We’re holding it on October 26, 2013 in Coffman Memorial Union at the University of Minnesota, Twin Cities. This year we will include a concert during the Veg Fest and we are reviving Their Lives, Our Voices as a one-day conference the day after the festival!

Thank you again for your consistent support!

Yours for the animals,