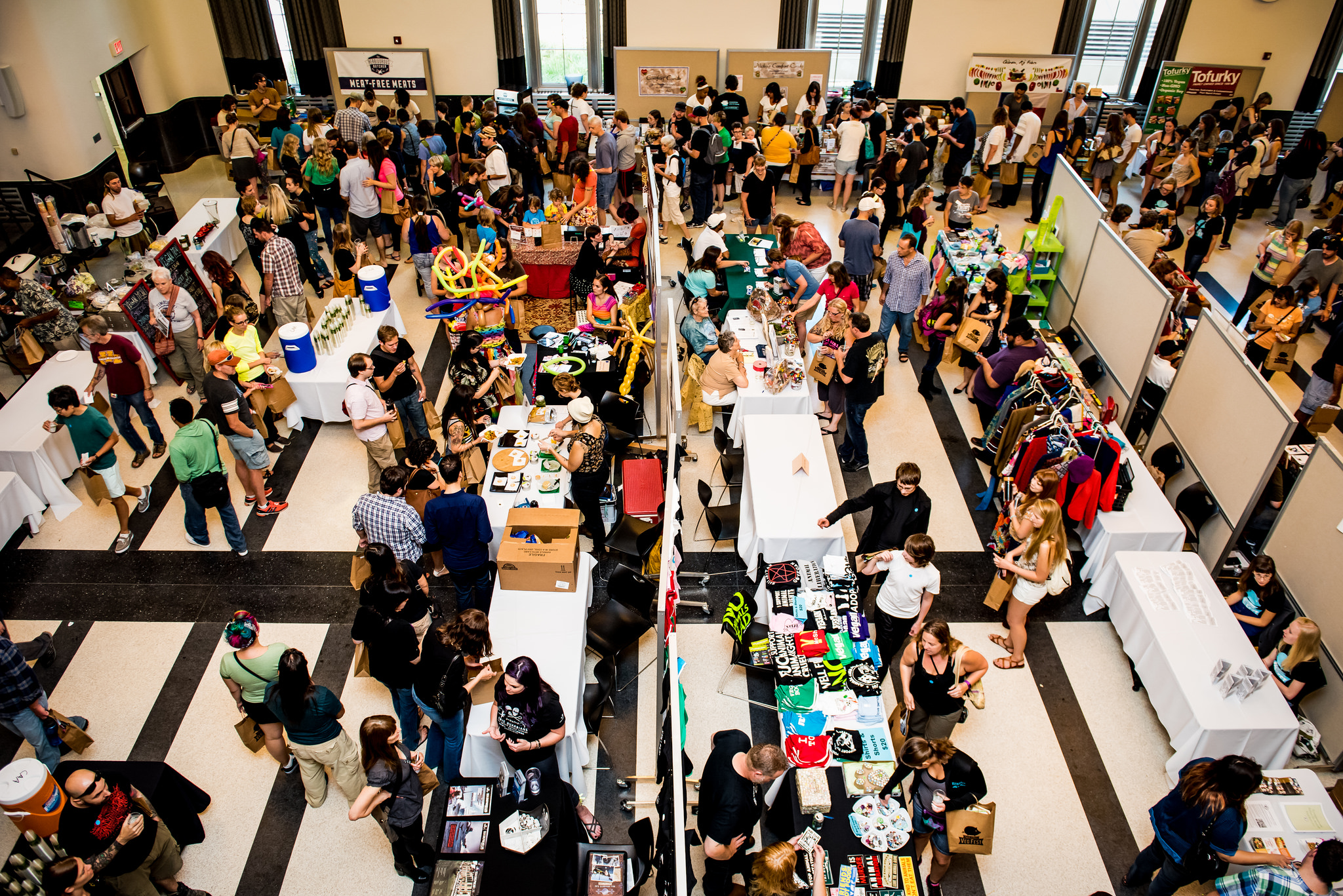 Sunday’s third annual Twin Cities Veg Fest was a lot of fun and a lot of work. As usual, I was nervous about the event. This is Compassionate Action for Animals’ largest event. Those of us who planned the event invested months of effort into it, and we want this event to go well for ourselves, but more importantly, for the animals on whose behalf we do this work!

Well, my fears were (as usual) for naught. The event was a smashing success, with around 2,300 people coming to try delicious vegan food, learn more about animal issues, and celebrate compassion. We had a long line of people even before we opened, which was good because Minneapolis city council member Cam Gordon came by to read his Meatless Monday proclamation for Minneapolis. We’re so grateful to Cam for his support on this crucial campaign.

Once we opened the doors, the flood started. Based on the number of bags we gave out, more than 500 people entered in the first hour alone. Needless to say, it was crowded, and there were lines for all the delicious samples and food to buy. I was particularly excited to try a new donut from Glam Doll Donuts. They had a maple bacon donut with vegan bacon from The Herbivorous Butcher. It was delicious.

I also sampled some vegan cheesecake from Muddy Paws Cheesecake. If you haven’t tried their products before, you’re missing out. They can make almost every single one of their flavors vegan. I shared a slice of Chocolate Decadence with my wife and it sure lived up to its name!

I was thrilled with the cooking demos at this year’s festival. We’ve talked about this in past years, but we never felt like we had the resources to include them along with everything else. This year, we made them a priority and they were a big hit. Every session was done in front of a packed room, with latecomers getting stuck outside the door (sorry). I was lucky to catch some of Mistress Ginger‘s demo and her amazing food samples. What a great entertainer she is! Not only was she making delicious food, but she managed to keep the audience engaged and laughing the whole time.

And as usual, our speakers delivered. I sat down to listen to Taylor Radig’s powerfully moving presentation about her time as an undercover investigator. She gave us a firsthand account of the terrible cruelty that animals on factory farms endure. It was tough to hear, but as tough it is for us, it’s infinitely worse for the animals she told us about. Fortunately, events like Twin Cities Veg Fest are helping us all move toward a more compassionate world.

Of course, no event is perfect. It was definitely too crowded, and I’m sure all of you will be happy to hear that this was our last year at Coffman. We’ve very clearly outgrown the venue, both in terms of exhibitors and attendees, and it’s time to move on. This is the kind of problem we like to have, though. Next year we hope to find a venue that lets us have at least some access to the outdoors. You told us that on a nice day you want to be outside, and we hear you.

I’d like to thank all of our speakers, cooking instructors, and volunteers. All of these people came out to support this event because of their belief that animals matter, and we truly appreciate their hard work and dedication. Finally, a special thank you to all of my fellow planning committee members. Planning an event of this size is a truly epic task, and everyone on the committee worked diligently over the past year to pull it off. How amazing is it that people would commit such energy and time to this work for just the satisfaction of seeing it done? Even more amazing, some of these folks will sign up to do it all over again next year, just as they have for several years running.

I’m inspired and humbled to know so many people willing to go to such great lengths on behalf of animals. I’m also inspired to see how many people joined us at Sunday’s event. The endeavor to give animals the respect and compassion they deserve has been going on for many years, but I can see a day in the future when that endeavor has been completed. Events like Twin Cities Veg Fest get us a few steps closer to that day, and I’m happy I could help make it happen.