I recently interviewed vegan runner Aaron Zellhoefer about his experience competing in the Ragnar Relay Race with an all-vegan team on May 8 and 9, 2015. Their success goes to show how a compassionate, plant-based diet can fuel top-notch athletes.

JL: Congratulations on winning the Ragnar Relay race! Is it true that your team of vegan runners took first place?

AZ: Out of 526 teams, our team, the Strong Hearts Vegan Power (SHVP) A Team came in 4th place. In our coed division, there were 332 teams, and we came in 1st place.

JL: Tell us more about the race. Where is it and what’s the course like?

AZ: Ragnar Relay is an overnight running event for teams of 6 or 12 runners. There are 15 courses spread across the United States, and each of them is around 200 miles long. Our team ran the Cape Cod course, which is incredibly beautiful. We started in Hull, Massachusetts and ended in Provincetown. We ran through very quaint towns that date back to the early 1600’s and still resemble that time period.

JL: How was your team formed?

AZ: A call was put out on Facebook for vegan runners. SHVP has done two previous Ragnar races, but they really wanted to make a mark this time. There was so much interest that we were able to sign up 36 vegan runners and make three teams. Each team had two drivers, so there were a total of 42 of us. We were all vegan. Because we had so many runners, the team captains decided to put together a competitive team. Hence, the SHVP A Team was formed.  We had some really amazing runners. I felt intimidated by the level of strength on the team.   Two of our team members, Scott Spitz and Micah Risk, had been on the cover of Runner’s World Magazine in the months leading up to the race. We also had our strongest runner, Laura Kline. Laura is soft-spoken and kind, the sort of person who does not generally make her presence known. Yet she is a beast on the race course; representing the United States, Laura won the gold for her age bracket in the International Duathalon Competition in Australia. She averaged six-minute miles.

JL: Wow, sounds like an powerful team. Plus, they had you! How do you train for an athletic event like this? What do you eat to help support your stamina and strength?

AZ: I have always trained by trying to do as many miles as possible before a race. I think most runners will agree that miles matter most. Then, there is recovery from those miles. The night before the race, the Boston Vegetarian Society hosted a talk with Matt Ruscigno, a dietitian and nutritionist. Matt talked about the health benefits associated with vegan running. His main point was that there is not one specific food that vegan runners should eat. He said that all you should be doing is eating a variety of healthy vegan foods and that the rest will follow.

JL: When and why did you go vegan?

AZ: I went vegan in December of 1997. I was involved in the punk rock movement, and, despite the yelling and screaming, there were a lot of messages in the songs. It was great to go to punk rock shows and see so much activism. Environmentalists, feminists, wobblies (workers rights activists), and animal rights activists would go to shows and share information about issues of concern. I was already vegetarian and read up on why someone should go vegan. I saw it as a natural continuation of my reasons to be vegetarian. The reasons were spot-on for the environment, human rights, health, and especially animal welfare and animal rights.

JL: How did you get into running?

AZ: I got into running my freshman year of high school. I enjoyed nothing more than getting out on a running trail and leaving all of my worries behind. I enjoyed the natural beauty of my surroundings. It would make me appreciate what I have.

JL: What was the race like for you? How much of it did you run?

AZ: Each runner had three legs to run. I ended up running a fourth leg for a teammate who was not feeling well. I ended up running 16 miles at roughly a 6:30 pace. I have another Ragnar race in Utah coming up. This will be my eighth 200-mile relay race. I think I’ve been able to do these races so well partly because of healthy eating and training.

JL: What was it like winning the race with your team?

AL: The SHVP A Team all wore shirts that read “Vegan for health, the environment, but most importantly, for the animals. VEGAN POWER!” We wanted to get the name out there and we did. We got a lot of chuckles when we showed up. But, after some of the other runners realized how well we were doing, those chuckles turned into conversations. The race was a 189.3 mile race. Our team did it in 21:54:46. That’s a 6:56 pace for almost 200 miles. It was a fantastic time, and we got the word about veganism far and wide. 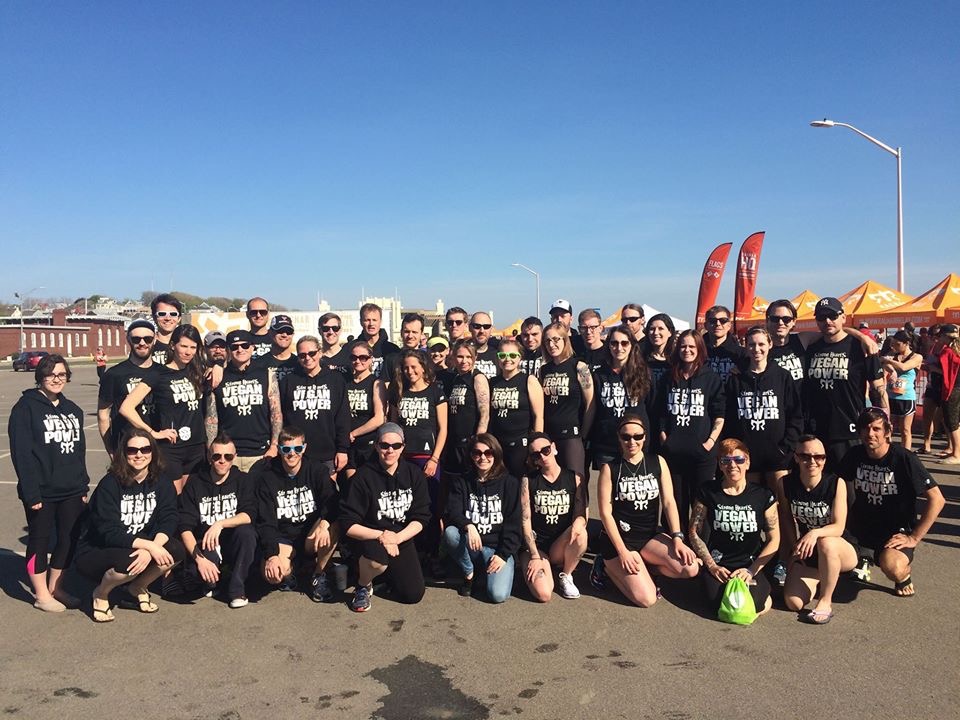