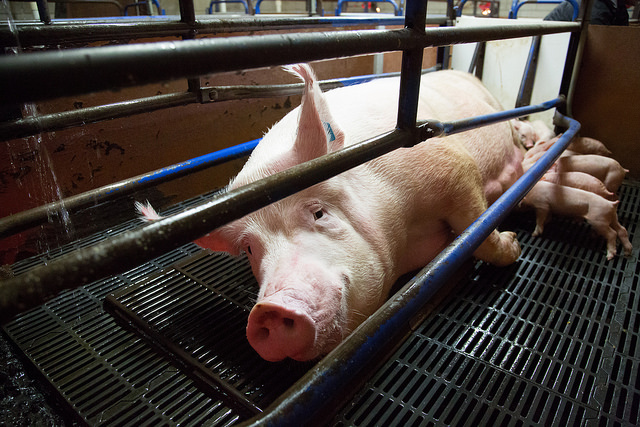 A mother pig is kept in a farrowing crate where she is prevented from naturally interacting with her young.
Waikato pig farm 2015 © Farm Watch
Licensed under CC BY 2.0

This time of year, we often hear the story of the nativity, with the baby Jesus surrounded by a donkey, camel, and other animals. Unfortunately, farmed animals today are hardly given a life that reflects the Christian values of kindness and compassion. Yet there is a growing concern for the treatment of farmed animals, and The Star Tribune’s article, “More Shoppers Demand Ethical Treatment,” published on December 19, was right in mentioning that.

Sadly though, the practices described in the article as “humane” don’t give pigs the lives they deserve. To make matters worse, Hormel is portrayed as a company supporting improved conditions for animals. The reality is that they have yet to make meaningful commitments to animal welfare. Let’s take a closer look at the video posted online with the article.

“We’re looking for farm partners that raise the pigs with integrity, raise the pigs with care,“ says the Hormel spokesperson. I am sure they are delighted to partner with families like the one featured in the article. But the truth is that there are no laws or policies at either Hormel or in state or federal law to stop suppliers from engaging in horrific abuse, such ripping out piglets’ testicles without painkillers. This is a standard practice in the industry.

Mercy for Animals has asked Hormel to commit to implementing the following practices throughout it’s supply chain:

Hormel has not yet committed to these practices. Other large suppliers, like Walmart and Nestlé, have committed to ending the use of gestation crates, as well as ending castration and tail-docking without painkillers.

Let’s also be honest about the conditions pigs face even on the best of farms. “Industry practice is to house pregnant sows individually to protect them from aggression they may face,” explains Mr. Mogler, the farmer featured in the article. In fact, mother pigs are typically forced to spend their pregnancies, averaging 114 days, in “individual housing” (otherwise known as a gestation crates) where they can’t even turn around. This practice is apparently changing on the Mogler’s farm, but it’s unclear how much time the pigs get to spend in group housing. In the video, we regularly see the pigs in farrowing crates (where they still can’t turn around) to nurse. After the piglets are removed from all contact with their mothers at around 28 days, the moms will be caged to be artificially inseminated, and so the cycle of pregnancy and loss will begin again.

In nature, mother pigs find a private spot to build a nest for their piglets. Other moms don’t bother them; they’re too busy caring for their own young. And, needless to say, the pigs aren’t killed at six months old so that somebody can eat them. Instead, moms and piglets stay together in social groups for a full year. The young pigs then move out on their own, and adult pigs live four to eight years.

Obviously though, all of Minnesota’s pigs won’t be running wild. The good news is that farm sanctuaries here in our state such as Farmaste Animal Sanctuary, Spring Farm Sanctuary, and SoulSpace Farm Sanctuary take in pigs. In these loving and protected conditions, pigs can live up to 20 years, developing close bonds with humans and other animals.

There is much that concerned readers can do to help see that farmed animals have the lives they deserve. A great first step is to stop eating pigs. There are many bacon and pork alternatives found in grocery stores. Plant-based meats can be bought from The Herbivorous Butcher or ordered in dishes at many local restaurants.

Compassionate Action for Animals and other local groups can support the transition toward plant-based eating. Together, let’s make this holiday season meaningful. Let’s take compassionate action for farmed animals, and start taking them off our plates.

A version of this commentary was submitted to the Star Tribune but not published. We are sharing it here on our blog instead. If you’re interested in writing letters to the editor in response to breaking news stories, please let us know.