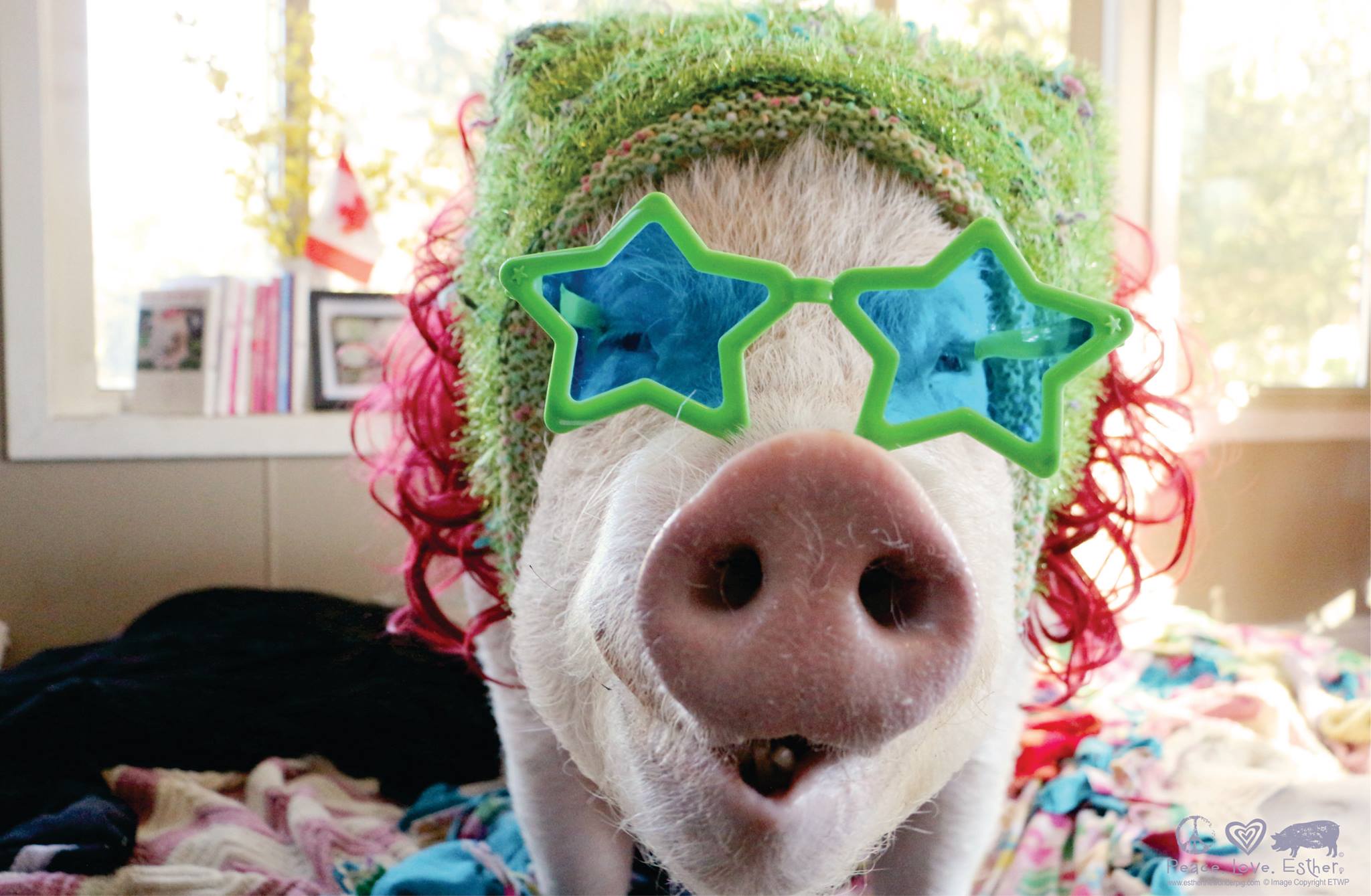 Last week, The Washington Post shared the story of Esther the Wonder Pig. She’s the Internet sensation who was adopted as a mini pig but grew into a giant pig the size of three linebackers. She’s the kind of pig that you would find on a typical factory farm—bred to be enormous.

But Esther is not a factory cog in the wheel. Anyone who follows her on social media knows her as a living, breathing individual. She’s sometimes hysterically funny, often snoozing and nibbling, and altogether adorable.

At Compassionate Action for Animals, it’s our mission to reduce the suffering of farmed animals. We want to help the greatest number of animals and have the biggest impact possible. We acknowledge that the vast number of pigs alive today aren’t nearly as fortunate as Esther. Just last week, we shared this video of a shivering, scared pig on her way to a slaughterhouse. It was heartbreaking and for many of us a wake-up call.

Her name could be Esther, and she needs your help today. Please make a gift to Compassionate Action for Animals and support our work speaking out for farmed animals.

It’s a long road perhaps, but as Dr. Martin Luther King Jr. said, “Let us realize the arc of the moral universe is long, but it bends toward justice.”

We have to believe that’s true, and certainly there is evidence to show the arc is beginning to bend our direction. There have been undeniable strides in our movement to help animals: plant-based foods are increasingly in demand, the word “vegan” is one that virtually everybody knows, many celebrities are going vegan and talking about it with their millions of followers, and vegan food options are available at supermarkets and chain restaurants with increasing variety.

Animal agriculture is rightfully quaking in their boots. They consider the growing sophistication of animal activism and the rise in popularity of plant-based food to be two of the biggest threats to their business. And we are a threat because we are making a difference. We are creating change.

But how has that change happened? And how will the momentum continue?

It takes passionate, dedicated advocates like you to make the difference.

Over the past year, CAA has reached thousands of people through outreach initiatives. Check out these numbers:

And these people reached through our direct outreach programs are in addition to the hundreds who attend our community-building events, including potlucks, dine outs, camping trips, and the annual vegan chili cook-off.

All of these programs help raise awareness about why farmed animals need our help and how people can make more compassionate choices in their everyday lives.

Thanks to these volunteers and to the more than 200 other individuals who have helped with our programs throughout the year.

In many ways, it’s our local community of animal advocates that makes CAA unique and effective. As part of the global movement, we’re building vital momentum on a grassroots level.

We look forward to the tipping point, to that moment when the global community that takes action for animals becomes so large that we cannot be denied. Until then, we move forward guided by our new strategic plan, which includes branching into institutional outreach as well as expanding on our current programs.

We are very grateful for the support of our community through volunteerism and also through monetary gifts. Your donations do have an impact. They help to maintain the vital infrastructure and programs required to run an organization that reaches thousands of people every year. With those dollars, we help people get on the road to compassionate living, and we teach the next generation of advocates how to be most effective.

If you want to help animals, please make a gift today and support CAA’s effective advocacy. Your donation will be matched and you can help us reach our year-end goal of $24,000 by December 31.

We are very grateful for your support for CAA and your dedication to ending needless suffering and death.

We hope that whenever you see Esther the Wonder Pig, or even the other Esther on her way to the slaughterhouse, you will feel your compassion burning bright, whether it manifests as a feeling of joy or sorrow. But take heart knowing that you are doing your part to make the world a safer, kinder place.

Thank you for all you do for the animals.