Meet Mark Opsahl and Dini Pederson-Opsahl, the owners, co-founders, and operators of Anna Lake Animal Sanctuary, Minnesota’s newest farm sanctuary. Located in Underwood, MN, the sanctuary is devoted to providing a caring home to their residents through rescue, adoption, and education.

Established in 2017 as a microsanctuary, Anna Lake Animal Sanctuary quickly grew in size and is now home to 18 chickens, 6 ducks, and 3 cows. 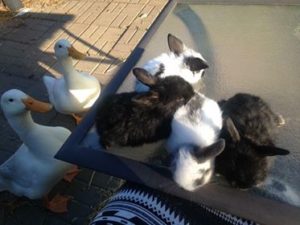 Mark and Dini strive to honor their grandparents while evolving the lessons they learned from them––Dini was raised in Minneapolis by her grandparents, while Mark was raised in a farming community. Dini’s grandmother was the first female animal control officer in the United States and an active advocate for marginalized and underrepresented groups in the country while Mark’s grandfather and father were both lifelong farmers.

“When we met, I told Mark I loved animals,” said Dini, “but neither of us were vegan.”

Mark and Dini became vegan shortly after moving back onto his family’s farm. “I always wanted chicken companions, and I told him let’s get some chickens,” said Dini. She quickly went vegan after adopting the chickens, recalling, “Once we got them and fell in love with them, it didn’t feel right that we were eating chicken.” Mark went vegan shortly after her. 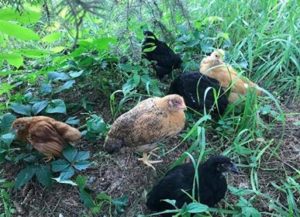 They began to look for additional opportunities to help farmed animals, which lead them to explore expanding the work they were already doing––to provide a safe living and rehabilitation space for more animals.

They decided to honor and evolve their family’s legacies, continuing the farm in Mark’s grandfather’s name and giving it a new life and purpose as Anna Lake Animal Sanctuary. 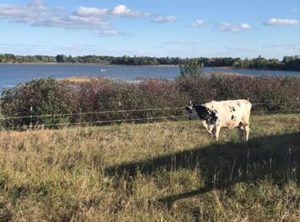 Dini’s advice for someone looking to start a sanctuary? Know your limits and start small. “Make sure you can do it yourself,” says Dini. “If you can take in one chicken and do it in an apartment or home, start with that and do that. I really am an advocate for microsanctuaries. Take in a chicken or two as a rescue and learn their needs really well and grow from there.” 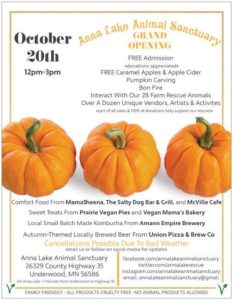 Starting small adds up to a big difference, especially for the lives of rescued animals who no longer live their lives in constant fear and pain.

The sanctuary’s grand opening is this Saturday, October 20th from 12:00pm – 3:00pm. They’ve invited up a number of vegan Twin Cities-based businesses as well as some local to Underwood that are willing to try their hand at veganizing some fall favorites.

Admission is free, donations are appreciated. All donations made will go directly towards supporting their residents this winter. Anna Lake Animal Sanctuary is located at 26329 County Highway 35 in Underwood, MN 56586. For more information, visit their Facebook event page or their website.