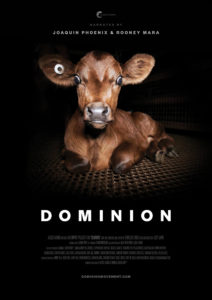 Dominion is an eye-opening film that many people don’t want you to see. Fortunately, Director Chris Delforce does, and he created an incredible documentary that exposes the ongoing atrocities committed by modern animal agriculture. Narrated by Joaquin Phoenix and Rooney Mara, Dominion is a hard-hitting documentary that has won multiple awards for its writing, directing, and music.

For some, realizing the origin story of what we once called food is a difficult process with many stops along the way. Dominion is a wakeup call to those still consuming animal products as well as to those who are not. In anticipation of the Twin Cities premiere screening of the documentary this weekend, we compiled some of the reviews the film has received.

This film will be one that switches on the lights… challenging an ignoble atrocity that masquerades as an “industry.”

This is the most important film you will ever watch. This documentary is a shocking expose of hidden violence behind our food system. Dozens of people had to step out of the theater where I saw it in San Francisco because they could not face the actual real-life footage of what happens behind the walls of animal farms and slaughterhouses. The filmmaker had his house raided by the Australian government and faced repeated threats for releasing this footage. This documentary is going to turn the world upside-down.

The filming techniques are staggering in their construction and the crew’s unwavering commitment to reveal the darkness is worthy of the utmost admiration… The film’s core value is to make us think about our relationship with the animal kingdom and assess the power we use (and abuse) but more than that, through the viscera stained graphic footage and lingering power, Dominion exposes how we need to grow, we need to improve and frankly, we need to wake the hell up.

This documentary will open your eyes to the truth about the ‘food’ you choose to eat. It explodes the myth of ‘humane slaughter’, show the reality of ‘free range’ and every day farm practices and animal agriculture in Australia, but common around the world, as well as some other practices that occur in other countries to bring us in the West, our ‘creature comforts’ like down pillows and fur coats.

The undercover footage that was bravely obtained by activists and painstakingly put together for this film, along with the drone footage, has some of the most moving and powerful scenes portraying the suffering and horror that is the life and death of farmed animals.

Especially if you still consume animal products, have the courage to watch this film and see if your choice to do so really stacks up as a good reason to do something that requires so much suffering, and creates so much waste, greenhouse gases and poor human health outcomes.

Whatever your views on eating meat this film will surely make you think hard about the life choices you make and what we can collectively do to be kinder to the animals we share this world with.

To experience Dominion for yourself, join us this Saturday at in Coffman Memorial Hall for the Twin Cities premiere screening. Learn more about the screening here and buy tickets here.