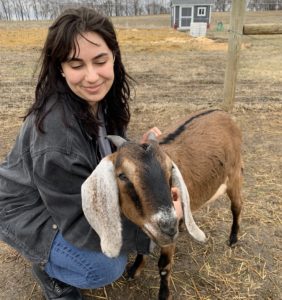 When I went vegan in college, I was in a small town in southern Minnesota that at the time had limited vegan options at restaurants and opportunities to connect with other veg folks. A month into living with my sister in an apartment a few minutes walk away from our school, we stopped buying eggs—the last animal product we had regularly in the fridge—and I asked her if she wanted to try eating vegan for the rest of the summer.

The majority of the vegans I knew early on into my new lifestyle were those I found online. Everything in my early searches confirmed the feeling I had—that cutting animal products out of my life was what I needed to do for the animals, the environment, and myself. I navigated conversations with family and friends about my new lifestyle when I was at home, and gradually replaced nonvegan items I used in my daily life while learning about other issues intersecting with the use of animals. I couldn’t look at “animal products” and not see the lives that had been ended prematurely. Spiritually, I had a hard time seeing how I could continue eating animals and their secretions.

It took me a few years to get to this point, and a big part of it was my health. I have had daily headaches, migraines, and chronic pain from a very young age and tried many things to find relief. I’d worked with a number of doctors and medical practitioners early on but hadn’t seen someone focusing on nutritional therapy until I was in college. I cut out dairy, which helped reduce the frequency of my headaches, but when I shared that I wanted to go vegan, I was told by the practitioner I was seeing that I couldn’t be vegan and heal my body. (I disagreed and started looking for another practitioner who would support me with this.)

One of the first practitioners I worked with that supported me was an acupuncturist. She gave vegan-friendly dietary advice and herbal formulas, and I quickly experienced the benefits of receiving acupuncture. I later moved to going to a community acupuncture clinic for regular treatments and saw how affordable, transformative, community-centered care is possible.

I have noted how the focus is often put on how healthy living vegan is, but my health was originally presented as the reason I shouldn’t go vegan. And speaking as someone who has struggled with my health for almost two decades, it’s easy to live in that fear that you’ll never be pain-free and “normal” if you’re receiving conflicting advice and opinions. Experiencing the possibility of care tailored to each individual’s experience is what led me to decide to return to school in the fall to pursue a degree in Acupuncture and Chinese Medicine.

I believe in a future that is better for animals, humans, and the planet we share and it’s been so exciting to see the amount of progress made in legislation, food production, and culturally by veganism moving into the mainstream in recent years. There is also still, always, work to be done.

It has been an honor to support CAA’s mission for the past two years as the Communications Coordinator. I believe in our approach to encouraging people to embrace their empathy for animals, and wherever they are, move toward a plant-based diet. I believe strongly because I lived through it and have seen others who have done the same.

I first learned about CAA through attending my first Twin Cities Veg Fest with some college roommates. As a new vegan, it was validating to see that the community was larger than the handful of veg folks I met in school, and that there were so many ways people were both advocating for animals and innovating for them to create a plant-based future.

CAA’s approach is different because it focuses on connecting with people wherever they’re at, be it through introducing them to their first plant-based meal at the Twin Cities Veg Fest or the Vegan Chef Challenge, encouraging them to consider the experiences of animals through Bridges of Respect and other outreach, supporting them in a new veg lifestyle through the Explore Veg Challenge and Vegan Recipe Club, or equipping them with the resources they need to make institutional change for the animals through Wholesome Minnesota. It is not about the speed that we get to an entirely plant-based lifestyle (even though I’d personally love for the world to go vegan overnight) but finding ways to make this change accessible, relatable, and sustainable to each individual moving toward veg. That, along with institutional and social change, is how we get there.

For me, this also means honoring what brought me to where I am today and learning how to support others in their healing journey while sharing my version of what living veg looks like. Everyone has their own why—what initially pushed them toward veg living. I believe the way we create a plant-based future is by sharing stories, supporting, and sharing that message in as many different spaces as we can, and being that example for yourself is the best way to communicate that to others.

I am so grateful to all of the amazing volunteers I have worked with during my time so far at CAA, our community, and for the support of the CAA board and staff, especially during this transition. I look forward to continuing to support our mission and the work that we all do together for the animals as the new Design Director and working with the new Communications Coordinator to strengthen this work!

Thank you all for what you do to create a better world for animals.

P.S. If you have yet to apply to join this awesome team, you still can! You can find more information here—applications are due July 19.