The proclamation was the result of a team effort. CAA Board members Henry Patterson and Julie Knopp partnered with Phillip Prospers, CEO of Living Naturally Abundant. They were inspired by successful efforts in other cities and states. Over the last few months they worked to educate and inspire Mayor Carter and his staff about this issue.

The proclamation raises the visibility of the connection between a plant-based diet and improved health and environmental outcomes.  Tying these vital issues together is key. It provides more reasons for people to consider a more compassionate diet. Informing and inspiring change that benefits both animals and the planet.

CAA is here to help! Take the Explore Veg Challenge. Get 15% Off at Local Restaurants During May’s Veg Month + Free Recipe and Shopping Guide! Sign up now!

Sabrina Beres is on the Twin Cities Veg Fest Committee as one of the Social Media Coordinators. We are lucky to have her bring her professional expertise in this area to our team!

She found out about CAA through her exposure to our social media campaigns. What she read fit with her long term passion for animal rights and veganism.

One of her favorite activities with CAA has been bringing her friends to the Twin Cities Veg Fest. She enjoys helping them find that vegan foods can be tasty and fun.

Why she volunteers: “I love that I can really have a chance to make an impact on something I care about! And social media platforms offer a fun way to interact with your audience and get personal about these objectives” .

We wanted to get to know her better so had her answer some questions:

END_OF_DOCUMENT_TOKEN_TO_BE_REPLACED

At Veg Out!: CAA’s Annual Casual Banquet 2022 we had several speakers. Some were volunteers and some were staff. Jodi Gruhn has been both. She is now the Wholesome Minnesota Coordinator and has been a Twin Cities Veg Fest volunteer as well.

In addition to sharing a brief update on recent Wholesome Minnesota accomplishments she shared her personal journey. She had been looking for more in life. An encounter with a Twin Cities Veg Fest ad led her on a journey. First to attend the festival. Then to volunteer. And now to helping increase the amount of plant-based food being offered in Twin Cities institutions.

If you missed her inspiring talk at the banquet or want to relive it we have shared the text below:

END_OF_DOCUMENT_TOKEN_TO_BE_REPLACED 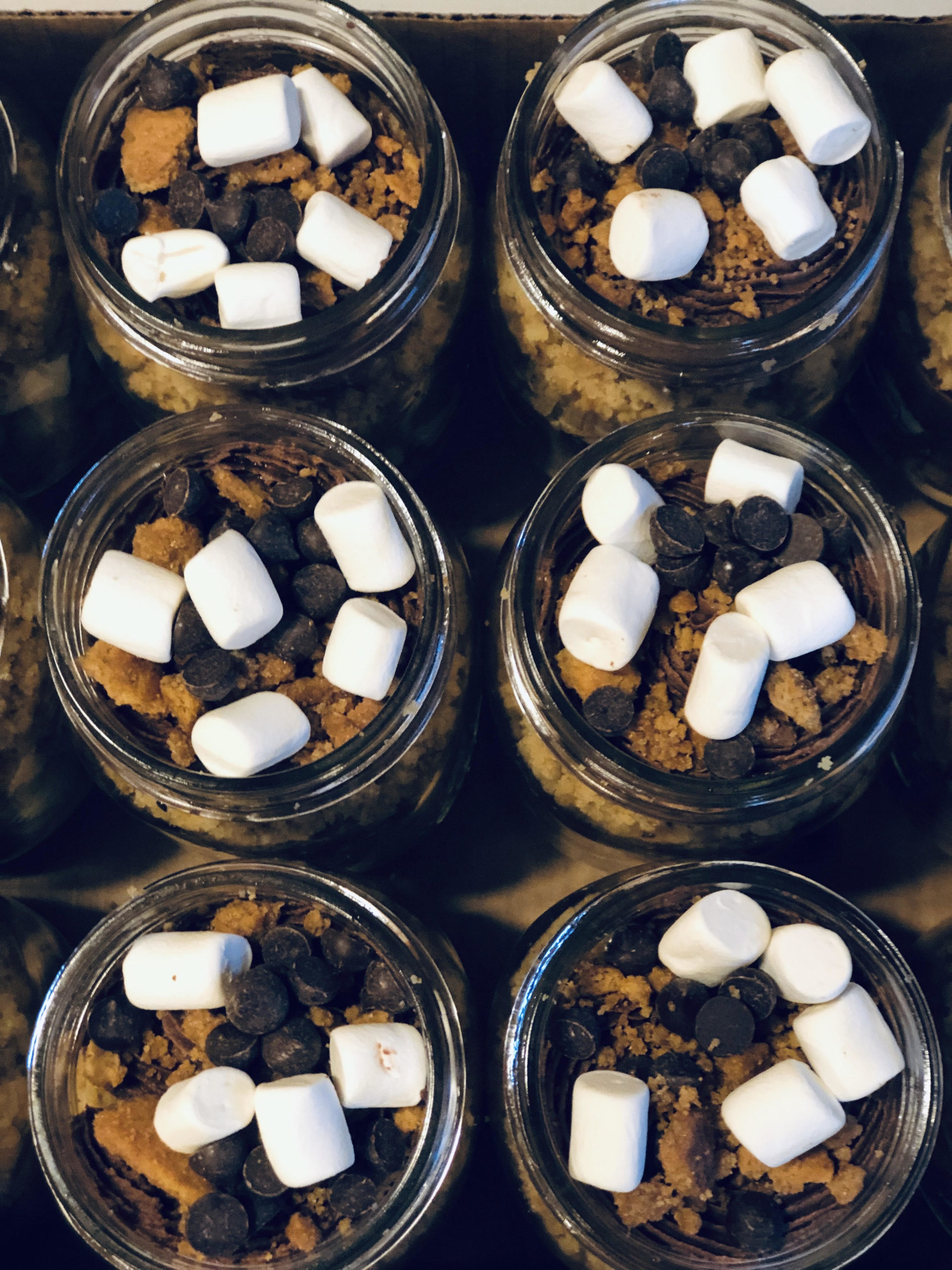 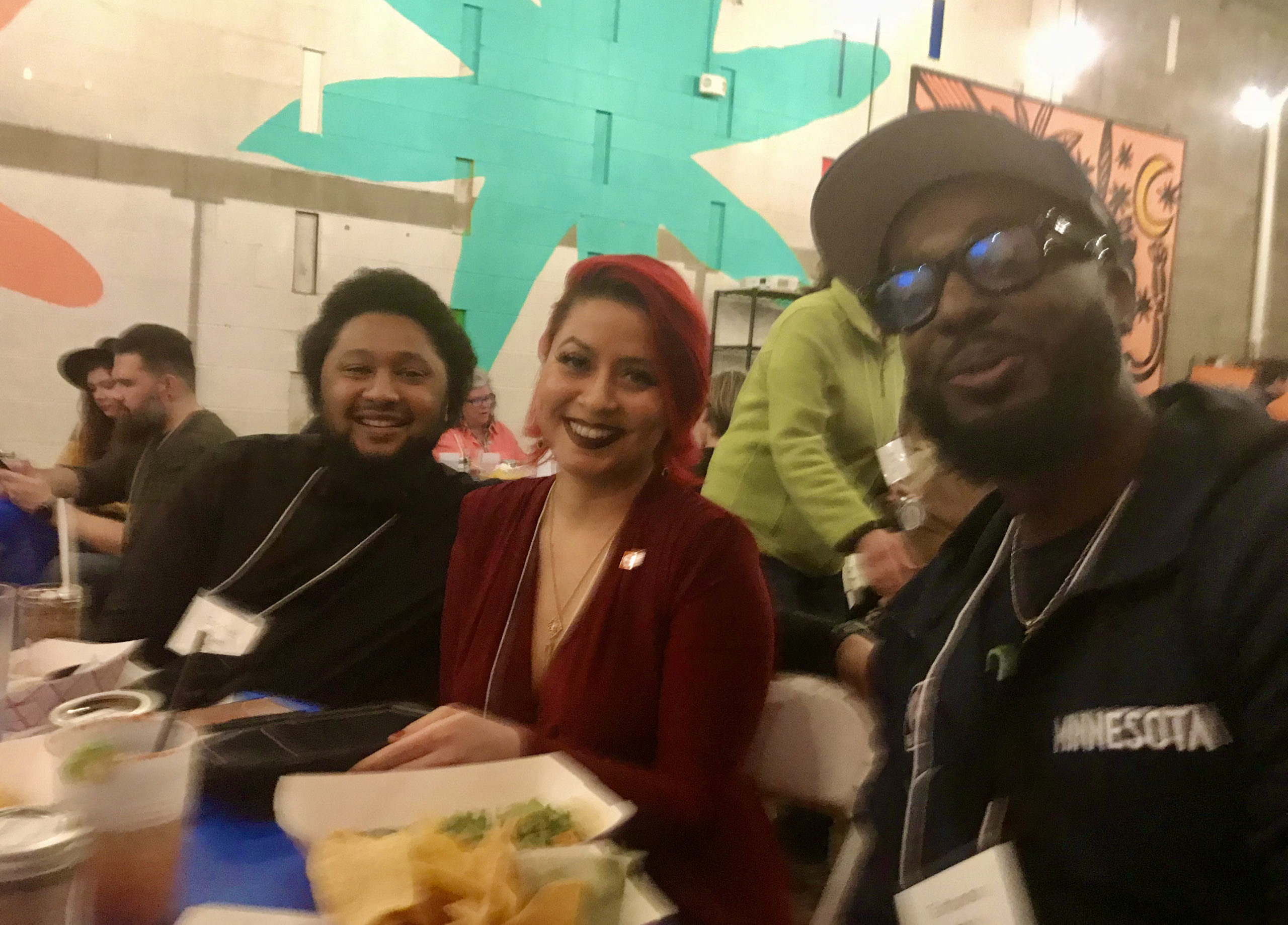 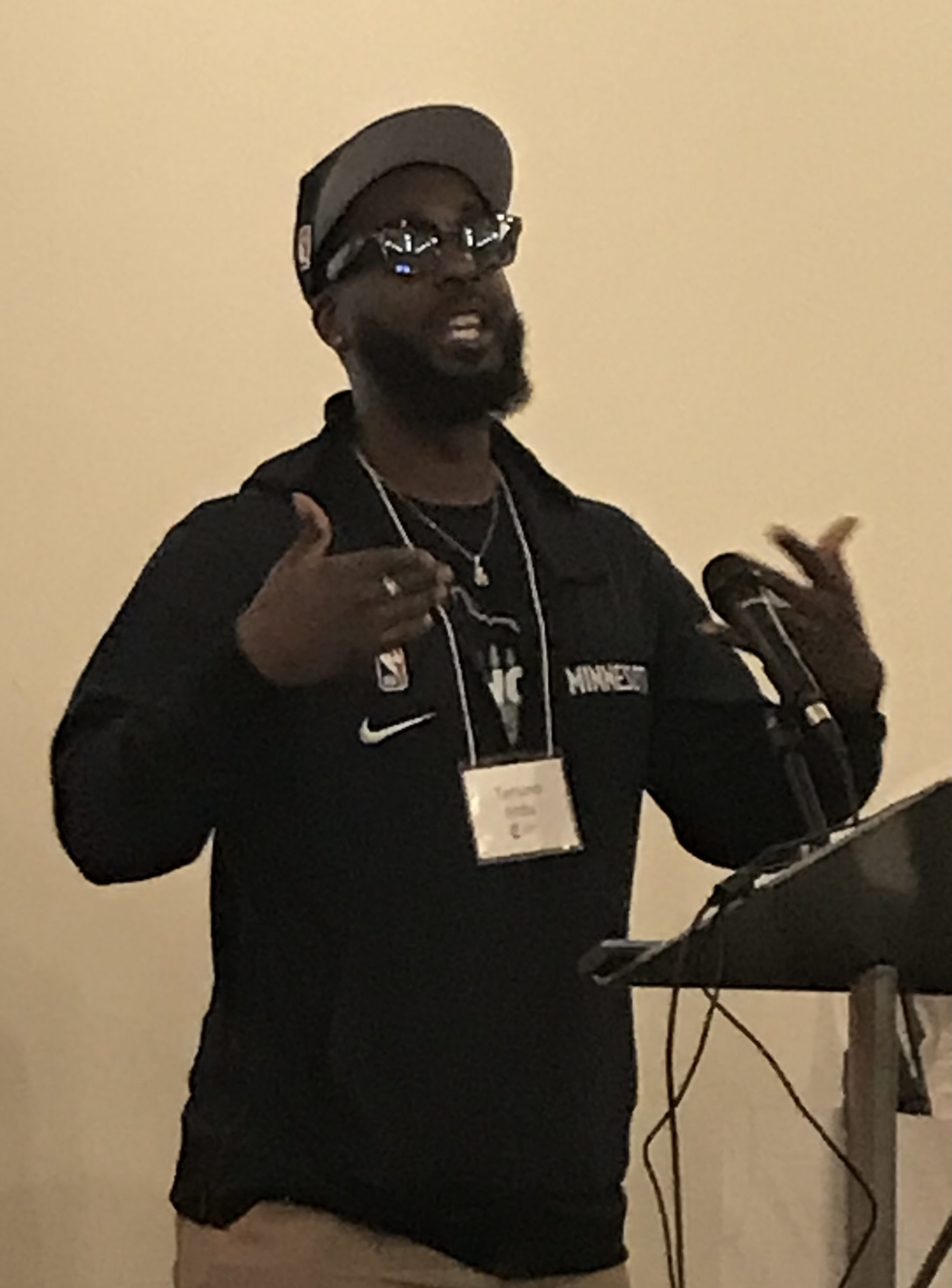 Tamuno shares successes of his work 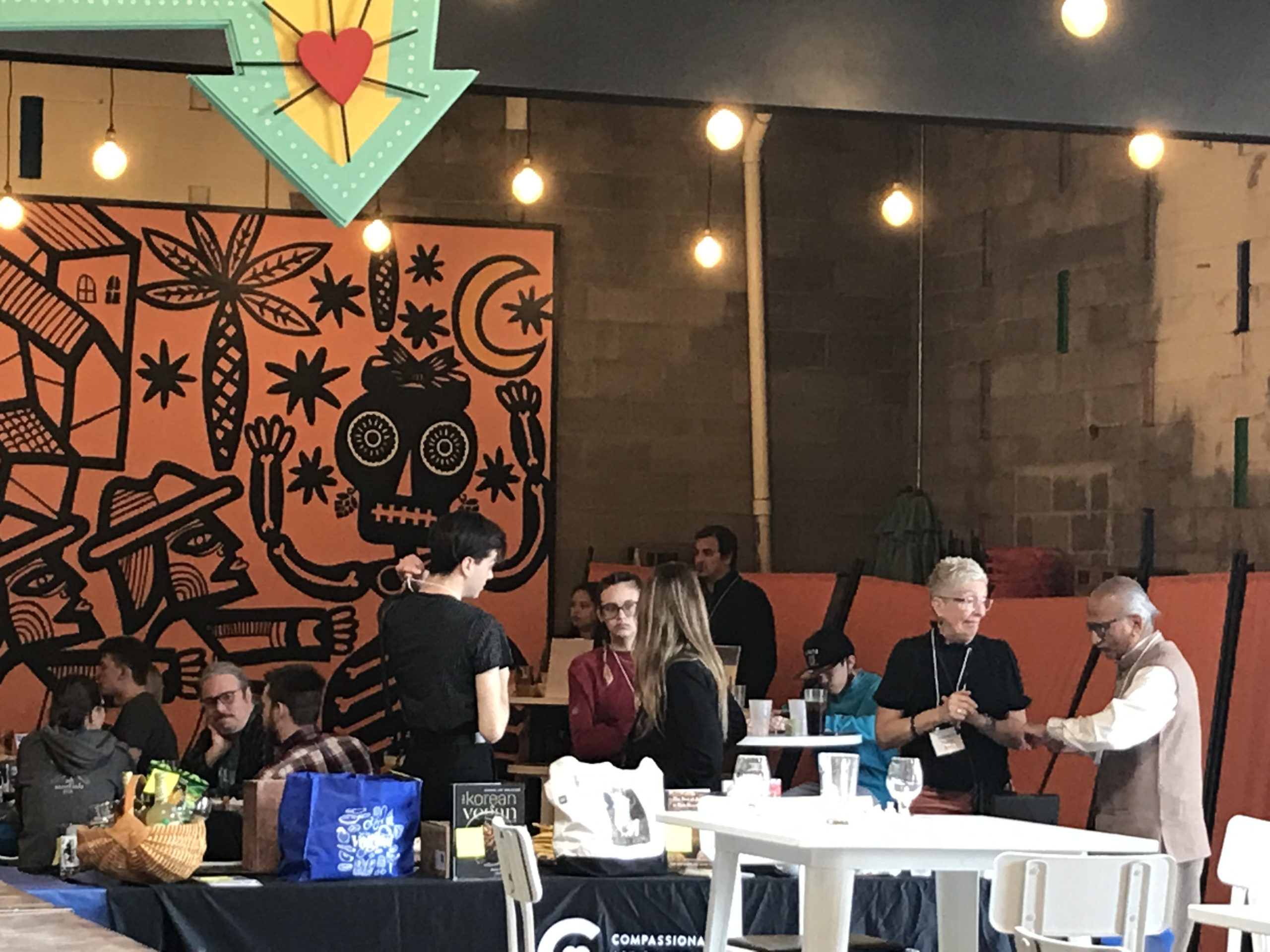 Reconnecting at the Banquet 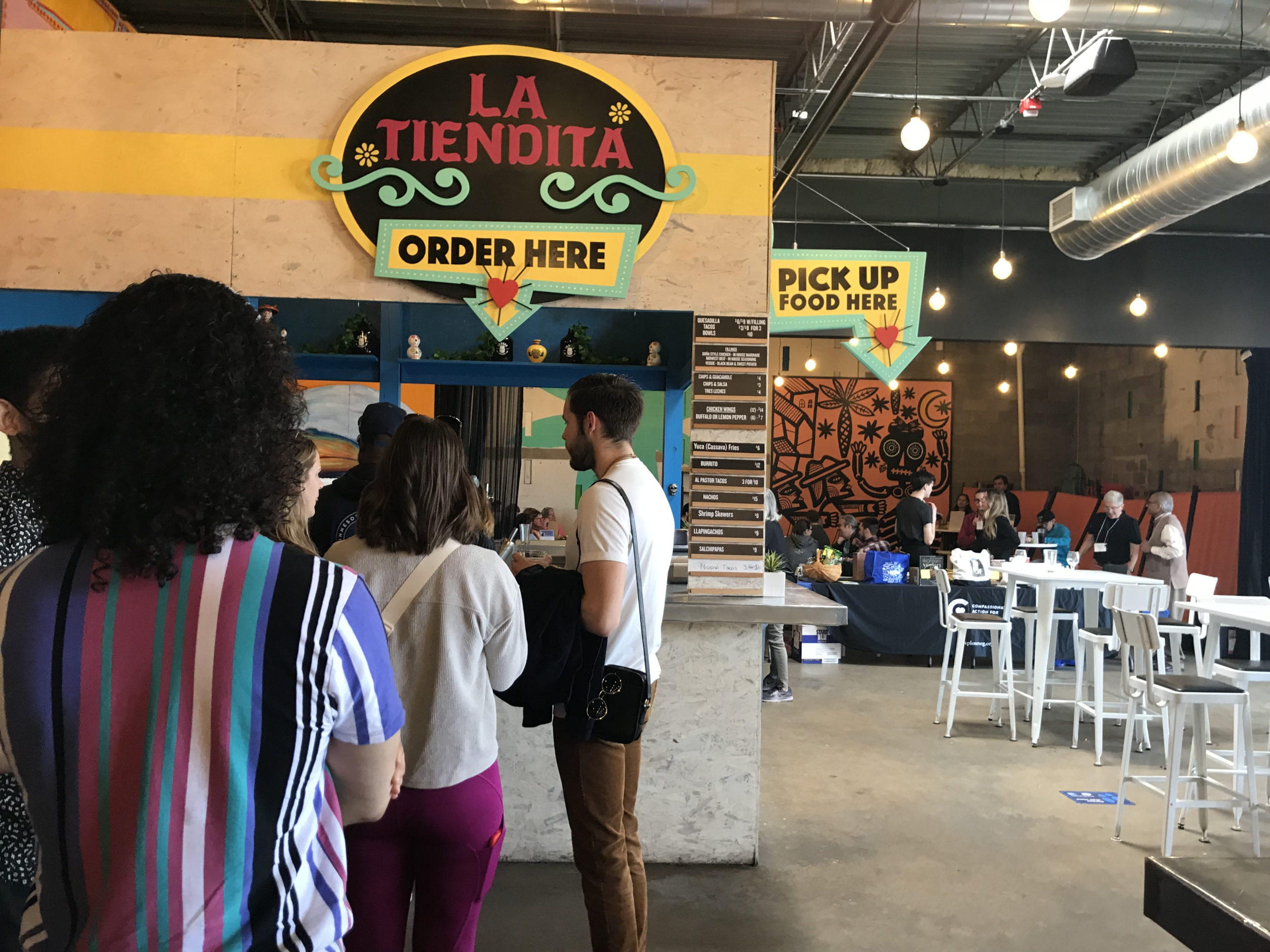 Can't wait for the yummy food! 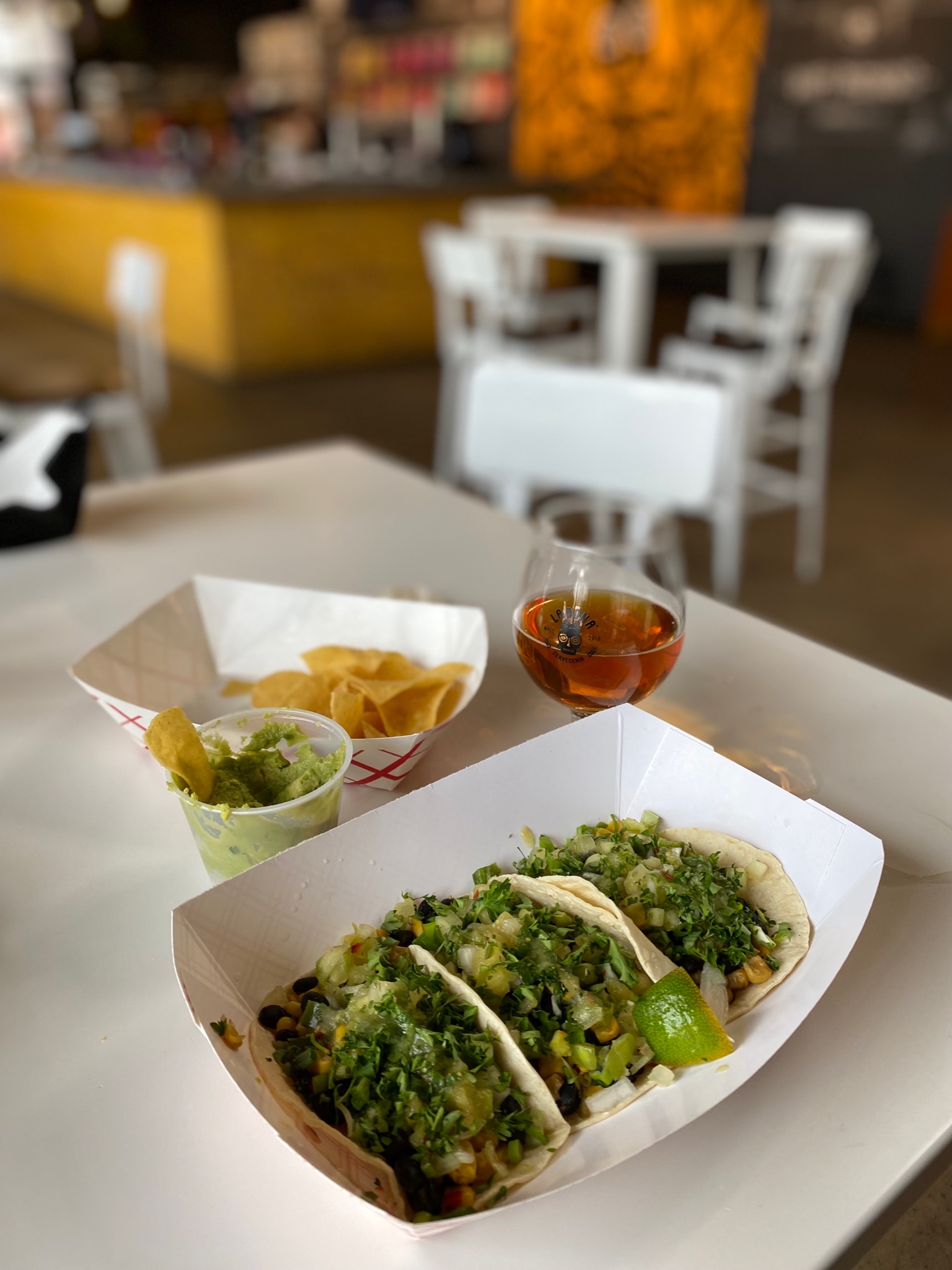 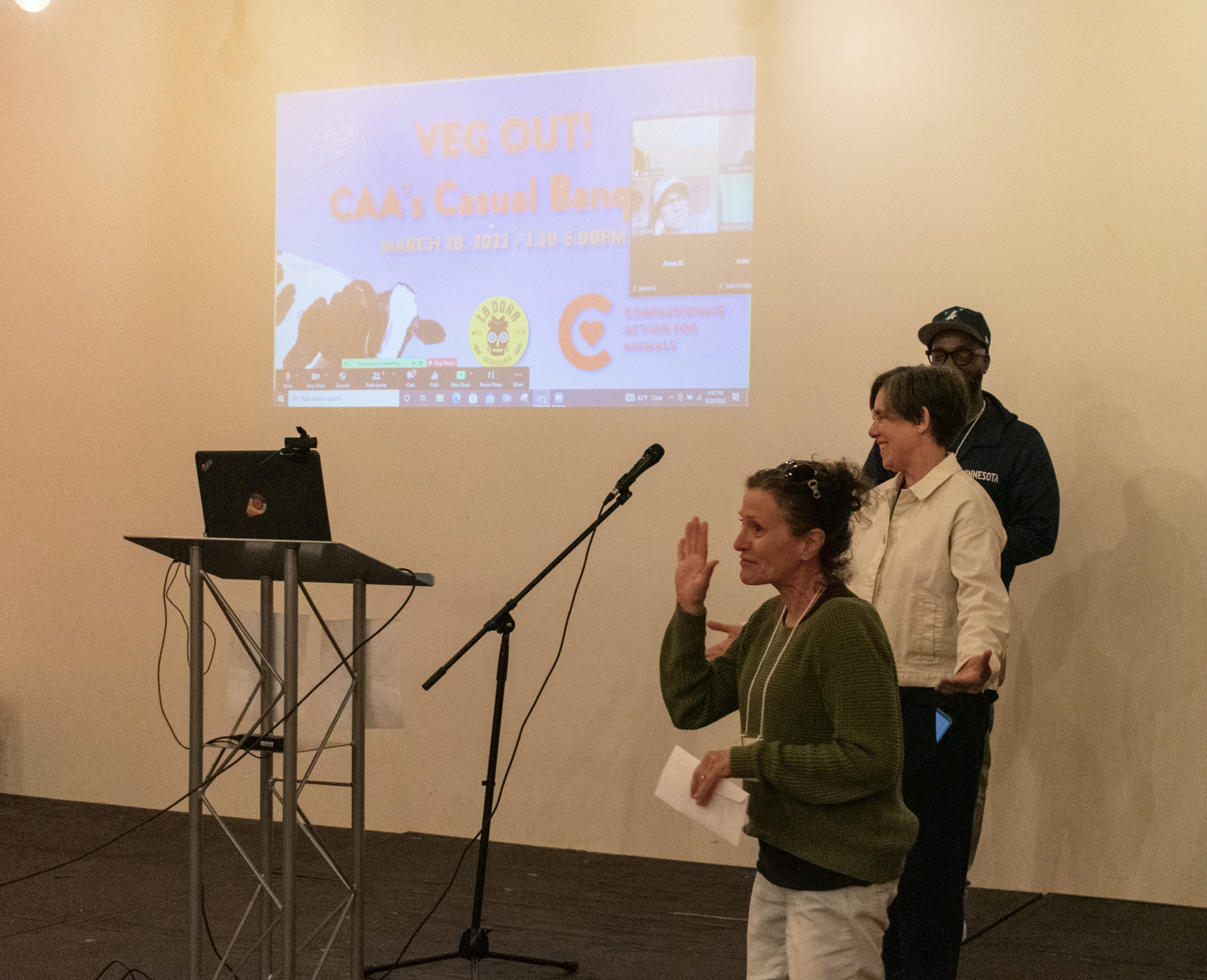 Quiz winner Celeste Knoff gets her prize!
Celeste Knoff won a 0 gift card to Reverie for her knowledge about animals, etc. 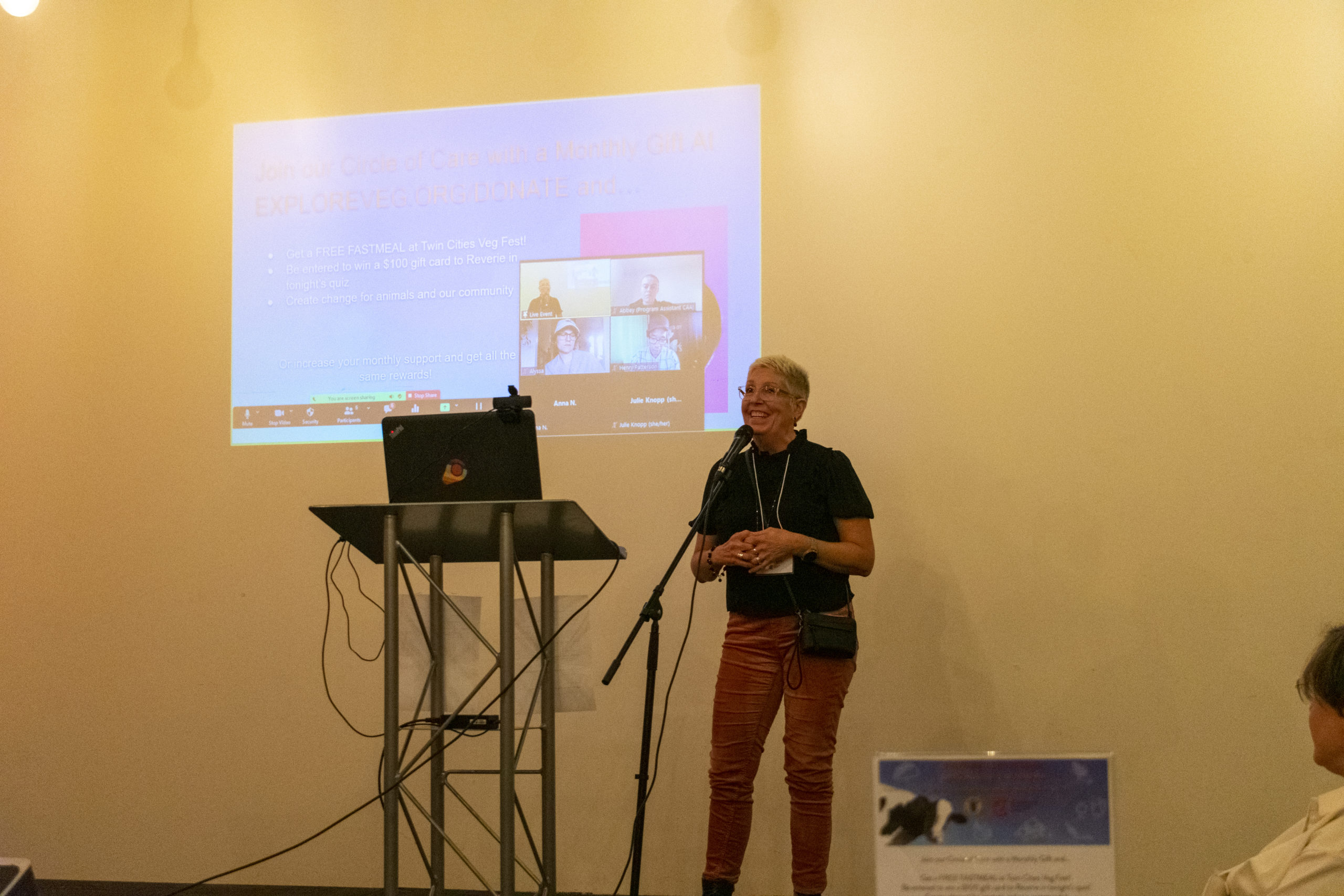 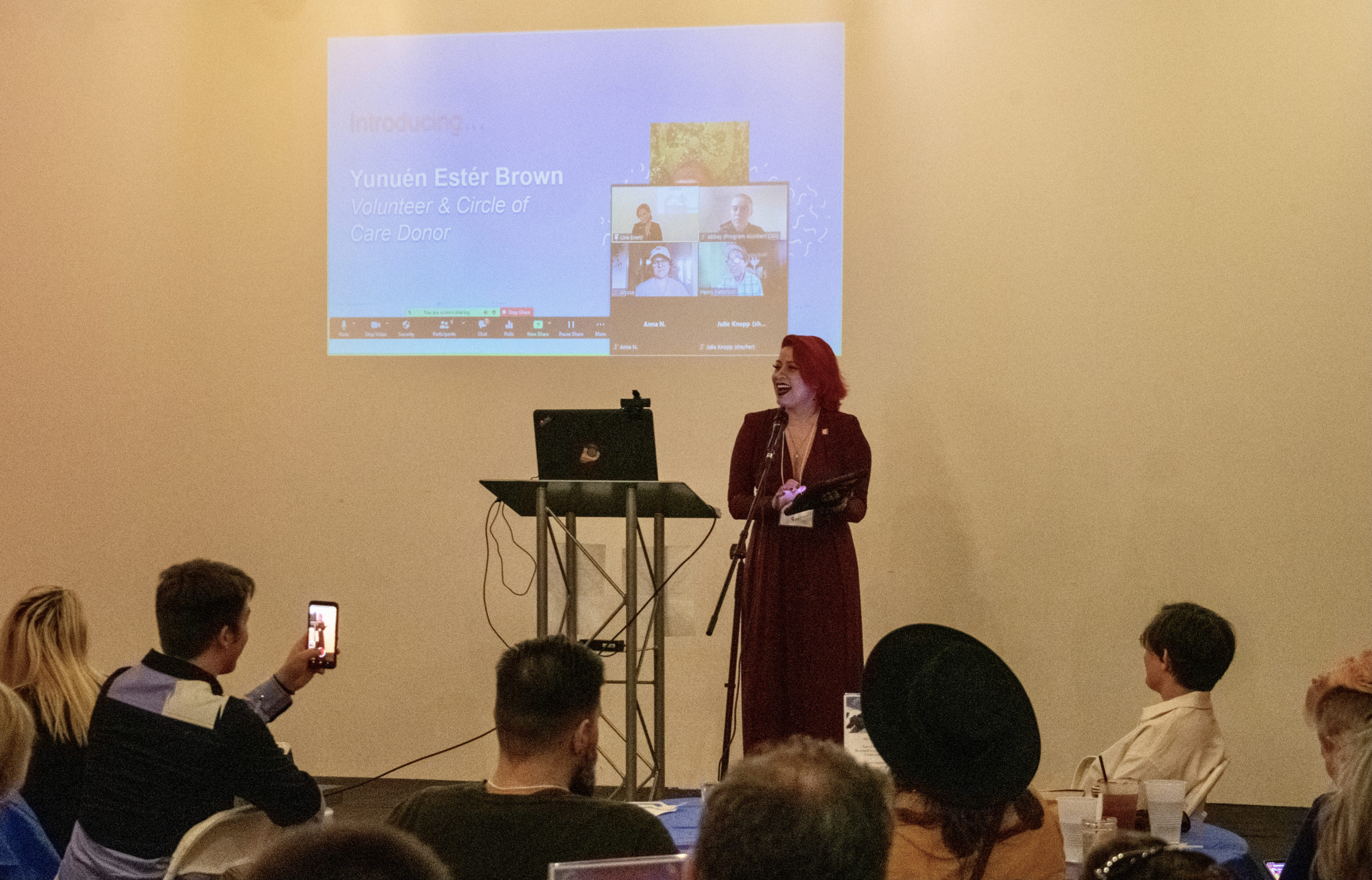 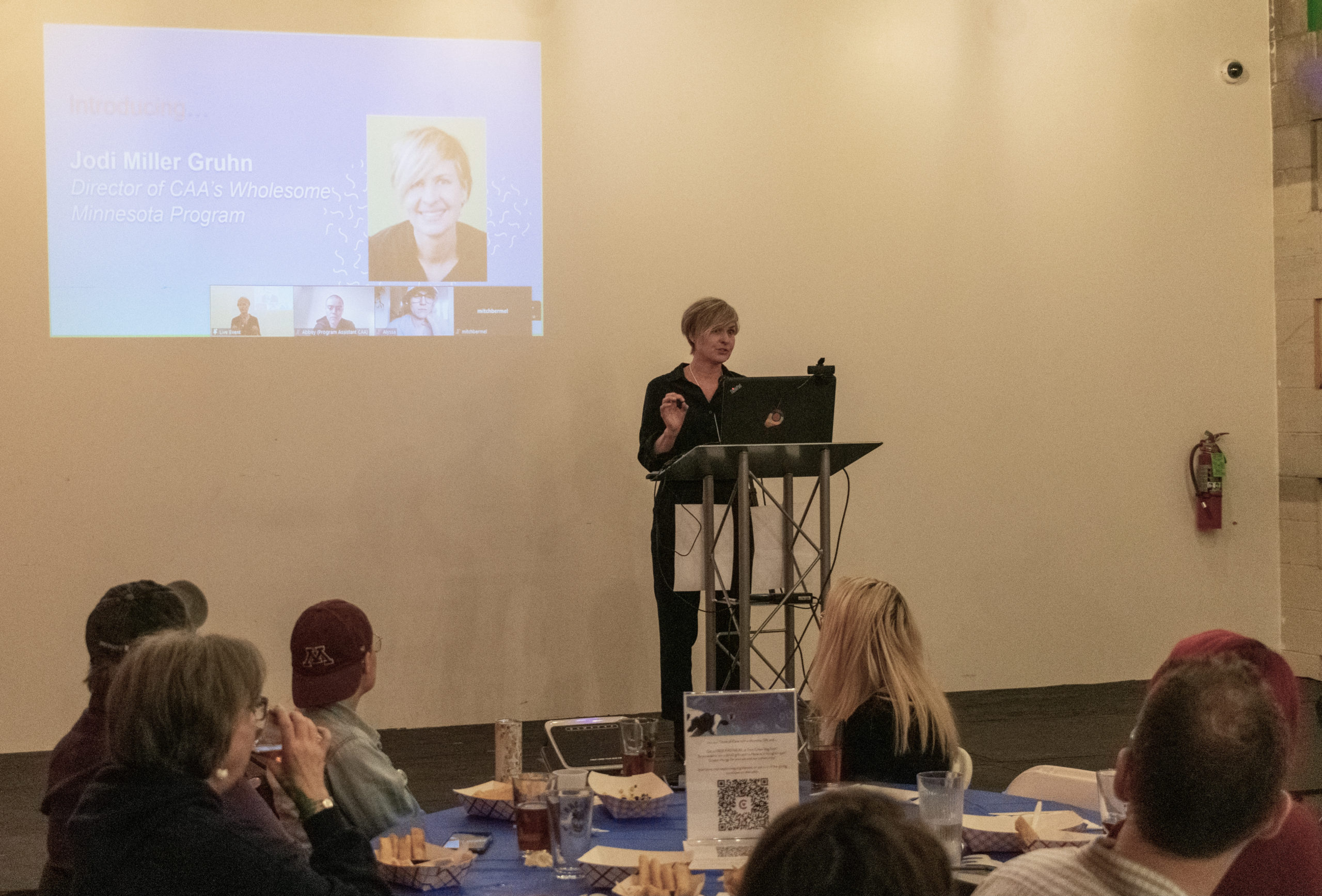 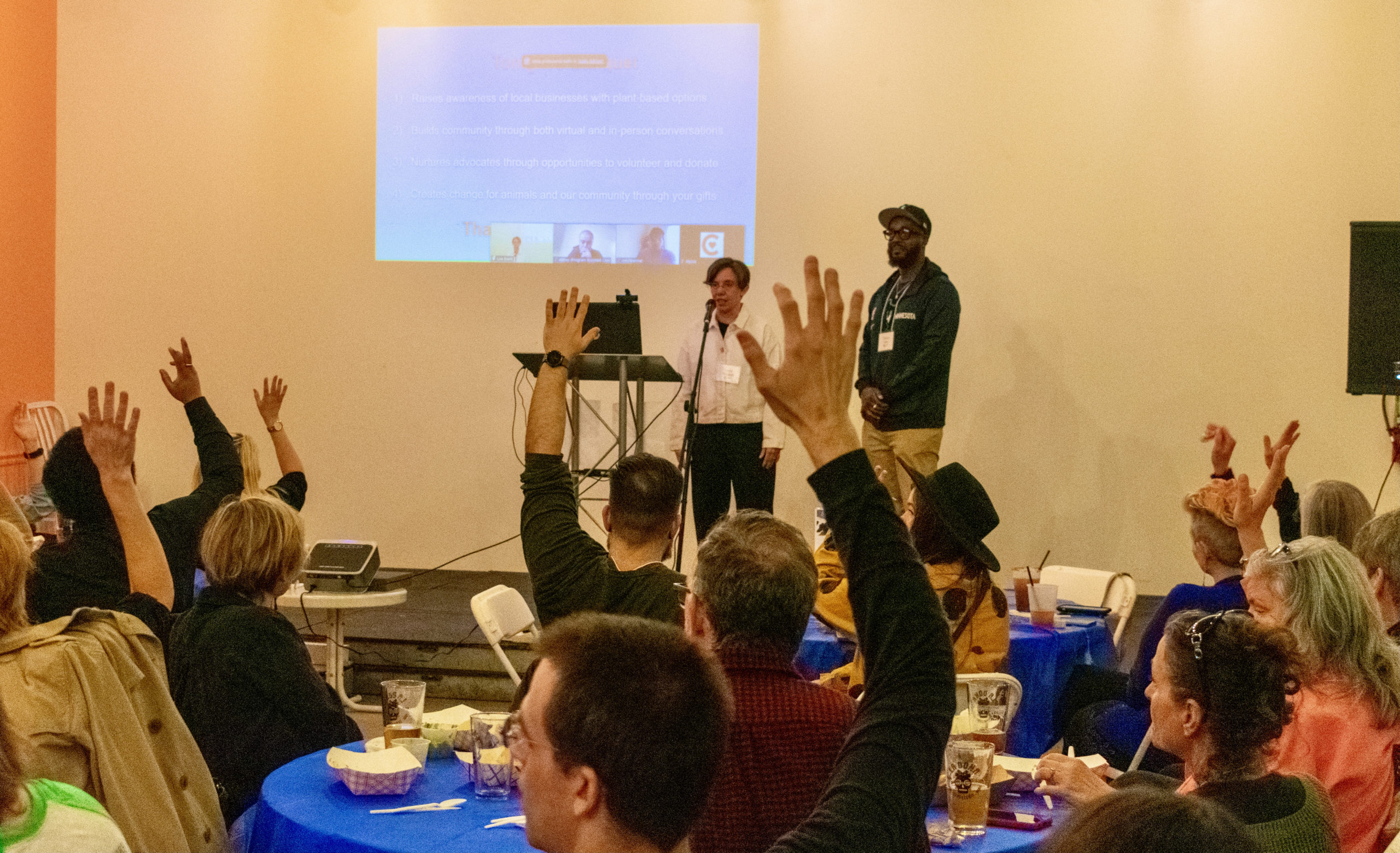 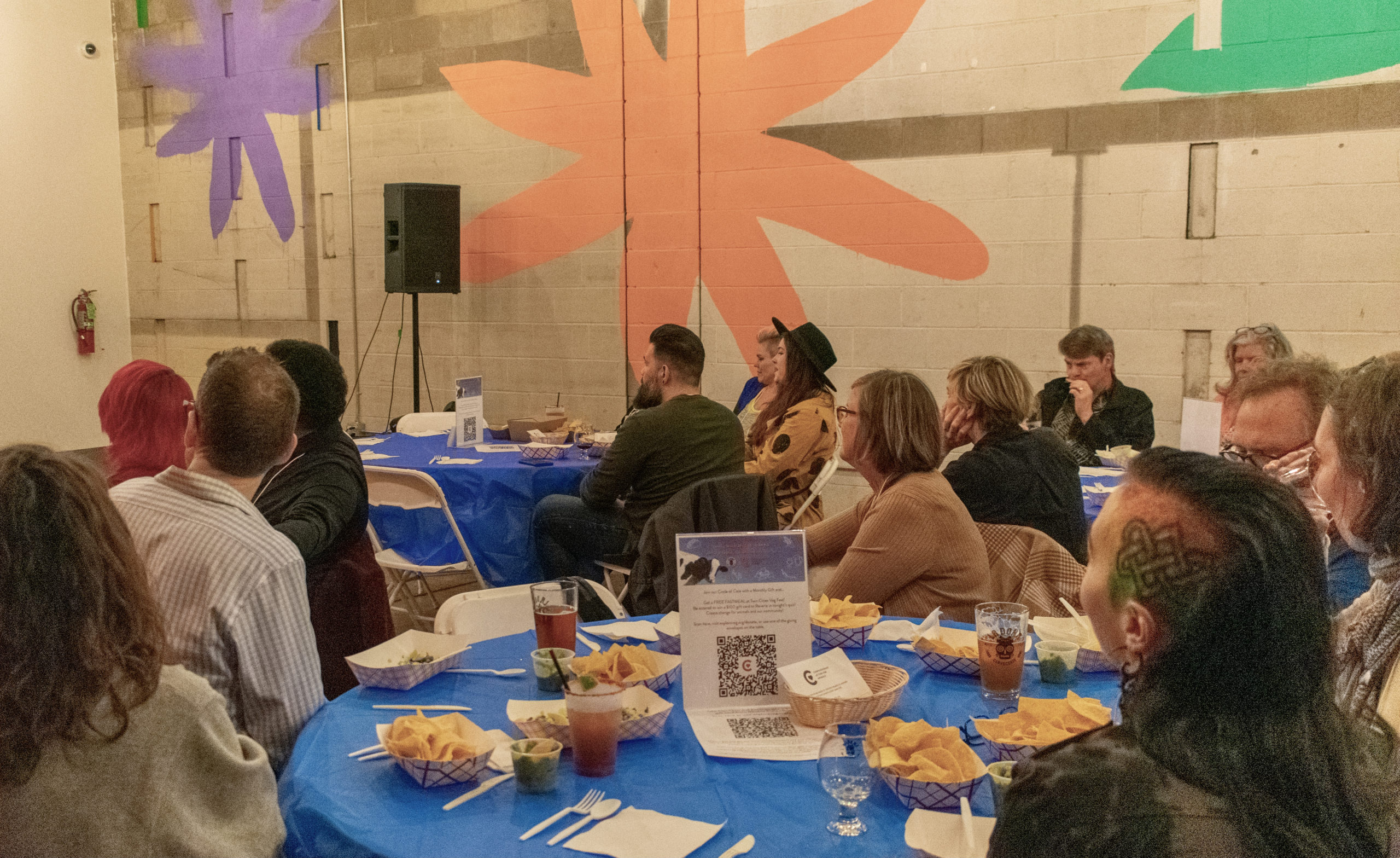 Banquet participants are glued to the speakers 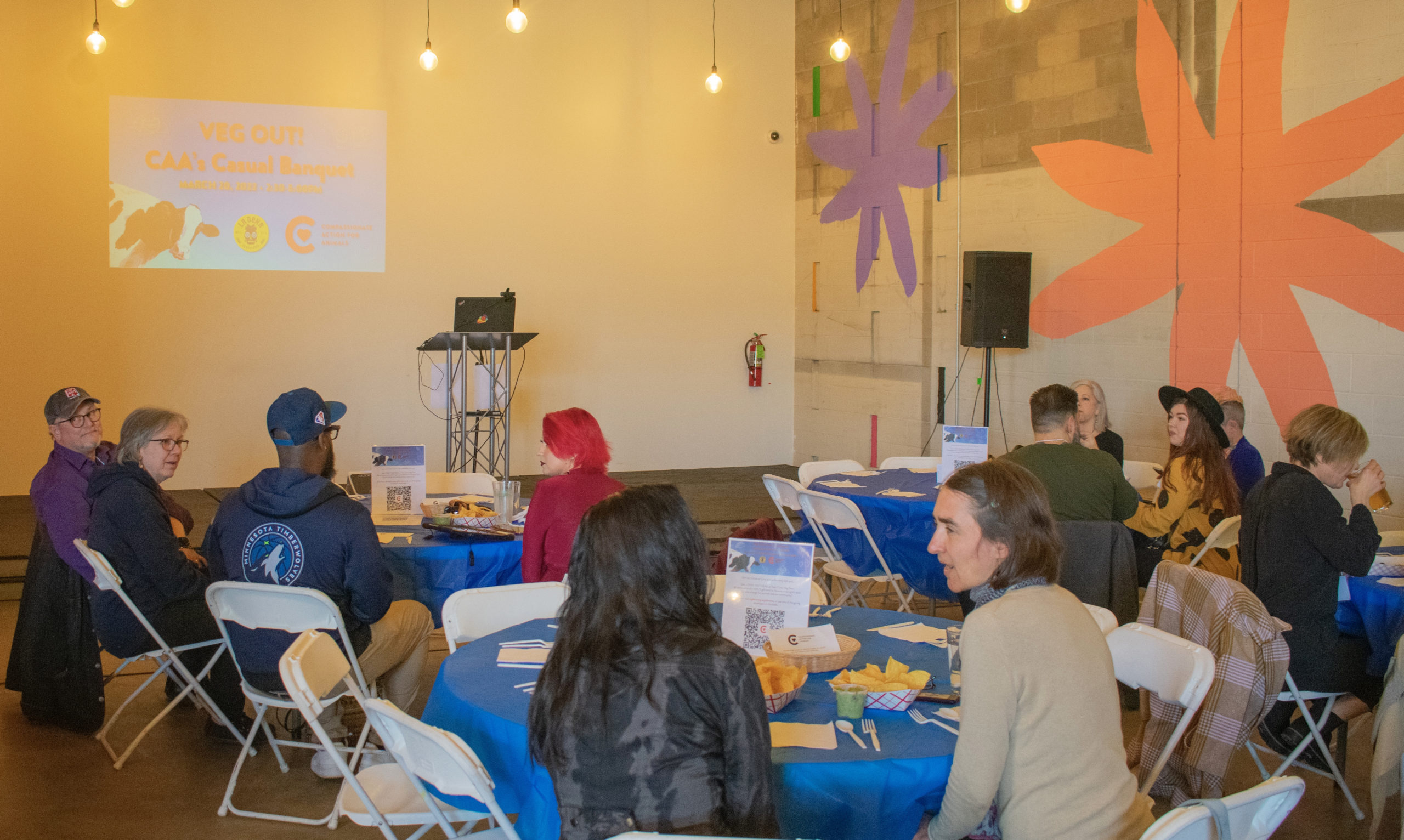 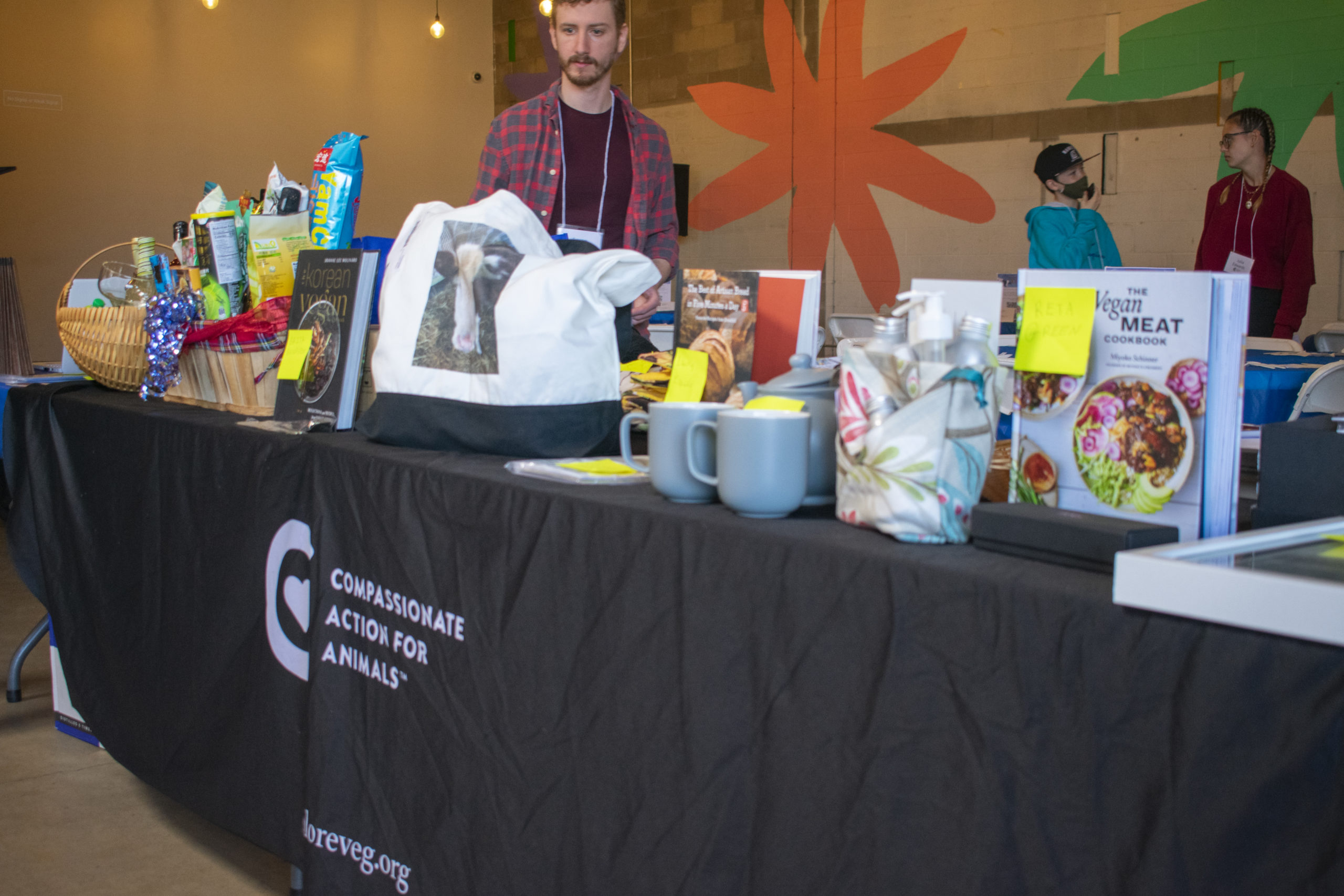 Some of the great auction items awaiting the winning bidders

Veg Out!: CAA’s Annual Casual Banquet 2022 was held March 20. Fun, food and friends made this a memorable experience. Over 55 fellow CAA supporters gathered in person with another 15 joining remotely. We feasted on black bean and sweet potato tacos, with great drink selections from La Dona Cerveceria. All while hearing the latest inspirational accomplishments of CAA from staff and volunteers. Topped off by yummy Rach Cakes desserts!

Celeste Knoff won a $100 Reverie card for her outstanding performance on the quiz. Over thirty happy people picked up the items they won at the auction. Between auction bids and donations we raised over $4,000 to support our work! Thanks to all who gave generously and the six people who joined our Circle of Care with a monthly gift.

Everyone walked out with great memories to recharge our batteries for continued work on behalf of the animals!

Dyne Stephenson has been an educator, animal advocate, and vegan, for over 25 years.  Since 2016, he has been a volunteer in many different CAA roles, including coordinator positions for the CAA Banquet and Twin Cities Veg Fest.  Additionally, he has attended and volunteered at Vegan Chili Cook Offs, Dine-Outs, potlucks, film screenings, and other events. We welcome him into his new role as our latest board member.

We asked Dyne some questions so that we can get to know him better:

What motivated you to get involved with animal advocacy?

In 1992, I went to see Alex Pacheco, the co-founder of PETA, speak at CU-Boulder. He was a great speaker, but the video he showed of animal torture and killing shocked me deeply. I became vegetarian that night, and a vegan after reading and watching more. Soon after, I became a volunteer for Rocky Mountain Animal Defense and the leader of the CU-Boulder Animal Rights Group.

END_OF_DOCUMENT_TOKEN_TO_BE_REPLACED

Yunuén Estér Brown shared her story at the recent Veg Out!: CAA’s Casual Banquet 2022. She has a strong love for farmed animals and devotes herself to their wellbeing. She sees her support of CAA as an essential way to put her passion for animals into action.

One way has been through volunteering at events like the Cinco de Mayo outreach. The Development Committee is another passion of hers. She and her husband, Sanchez, also generously provide a vegan taco meal each year to thank other volunteers. Their financial support includes being founding members of our Circle of Care sustaining donors’ group.

In the seven years she has been with CAA she has seen that our work gets results.  She and Sanchez, view their contribution as essential to our success. Yunuén shared: “I see donating as an act of activism to this movement and as long as there’s animals on this planet that rely on my compassionate empathy, I don’t see myself stopping any time soon.”

That is why she agreed to be a featured speaker at the banquet. Read on for the text of her talk:

END_OF_DOCUMENT_TOKEN_TO_BE_REPLACED

Adrienne has been a volunteer for CAA in various roles in recent years. She has as passion for our cause and brings that to her dedicated work. She was first motivated to a plant-based diet by her compassion for animals. Now she also sees the connection to improved health and protecting the environment.

She loves that she can live her values through her diet and her volunteer work. CAA appeals to her through it variety of approaches to reach people where they are and move them forward.

She appreciates that her volunteer work brings her in contact with like-minded people. That and the easy options for participation have made it fun. You can meet her at future events or on committees as she plans to continue volunteering.

We posed some questions to her below so that you can find out more.

How did you discover Compassionate Action for Animals and what made you decide to get involved?

What have you done for CAA as a volunteer?

What do you love most about volunteering?

What inspires you to eat plant-based and/or take action for animals?

When you are not volunteering with CAA, what do you enjoy doing?

Have you struggled with weight even after adopting a plant-based diet? Or are you worried you will start putting on weight? Going vegan can be a tremendous benefit to your health. Yet it’s not without weight gain challenges (think french fries and vegan ice cream!) This book engages the reader with personal stories of struggle and success. More than 100 recipes show the path to weight loss success — all while maintaining a plant-based diet!

The science is very clear. A whole-foods, plant-based diet is the healthiest possible way to eat—but veganism itself doesn’t mean health, as Chef Del Sroufe, author of the New York Times bestseller Forks Over Knives—The Cookbook, knows better than anyone. Sroufe managed to reach 475 pounds while eating a vegan diet rich in pastries, peanut butter, and potato chips. After converting to a vegan diet with minimal processed foods, sugars and added oils, he lost more than 240 pounds without giving up great food.

END_OF_DOCUMENT_TOKEN_TO_BE_REPLACED

Ever wondered how we pull together the Banquet? Behind the scenes a talented team is working hard on Veg Out!: CAA’s Annual Banquet 2022.  Both experienced and brand new volunteers are busy making it an inspiring and fun event.

Their work includes:  photographing the venue, developing the slideshow, coordinating  volunteers, and soliciting donations to  upload them to our Auction app. It’s amazing how much goes into planning such a major event. Staff couldn’t manage it without this talented and dedicated group of volunteers.

Find out more about them below:

Brita has volunteered to develop the quiz for our Auction contest. Quizzes have been integral to several of our recent events so we decided to add them to the Annual Banquet as well. Brita stepped up to help come up with a clever, challenging  animal-based theme and research the answer for us. She worked with our Slide developer to get the questions included and developed a spreadsheet to capture and score the answers.

To get to know her better, Brita answered some questions:

What inspired you to get involved with planning the CAA Banquet?

END_OF_DOCUMENT_TOKEN_TO_BE_REPLACED

Did you know that you can help farmed animals with a tweet?

We have an opportunity to make a long-term impact on issues related to animal protection and the environmental damage caused by industrial agriculture. You can help by tweeting our message.

CAA is working with 30 groups, led by Mercy for Animals, to change the National Advisory Committee on Meat and Poultry Inspection (NACMPI).  Help reach Secretary of Agriculture Tom Vilsack with our nominations for new members. We need your voice.